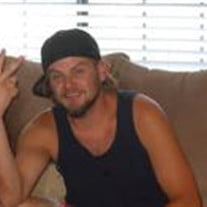 JEREMY HADLEY (January 5,1985- January 10, 2014) The world grew a little dimmer today with the passing of our beloved brother, son, uncle, and friend, Jeremy Hadley. It’s hard to put into words the impact that an extraordinary human being can have on the lives of others. Jeremy was an extraordinary human being. If you consider a person’s success by the lives he touched and the friends he made, then Jeremy was certainly among the most successful. If Jeremy ever lost his temper, or had a bad day, no one ever saw it. As far as his family and friends knew, God smiled down on Jeremy every day. He was the most positive, optimistic person who absolutely loved life and every adventure he could squeeze out of it. He could light up a room with his smile, which was often. His laughter was contagious; his smile infectious. One of his friends stated that “Everyone needed a little Jeremy to brighten even the worst of days.” Everyone played second fiddle to Jeremy when he entered a room; not because of any fanfare on his part, but just because of who he was. People were naturally drawn to him. He had a beautiful, generous heart; maybe that’s why children, especially, loved him. He was a real live pied piper. He adored his nieces and nephews and they adored him, as we all did. He made an impression on all those who had the privilege of knowing him. He knew no strangers because as soon as you met him, you were counted among his friends. He loved going to “The Cabin” where he would zip line for hours (often in the dark), or ride ATV’s. He was an avid snowboarder and golfer (with frisbees and golf balls!), but had the most fun being with his family and friends. His siblings and their spouses were his best friends. He was especially close to his sister, Rashelle, and special friend and companion, Anna. Jeremy, we were blessed to have you in our lives, if only for a short time. Jeremy’s daily reminder to everyone…. “SMILE!” Jeremy is survived by his Mother and Father, John and Elaine Page of Draper, Utah; companion, Annaleah Grieve; siblings, Jason (& Debbie) Hadley of Lehi, Utah, Jeni Alexis Hadley of Huntington Beach, California, Justin (& Holly) Hadley of Orem, Utah, Rashelle Murray of Orem, Utah; Jessica Page Nield (& Rob); nieces and nephews, Jackson, Matthew, Rachel, Savana, Sidney, Cannon, River, Chase, Connor, Miles, and Phoenix; his second family, Charlotte And Earl Hadley (Nana and Papa), Dale and Raylene Hadley, Megan Hadley Sanford (Taylor), and tons of friends and extended family. Family and friends are invited to gather for a celebration of Jeremy’s life on Tuesday evening at 6:00 pm at the Cascade 4th Ward Cultural Hall, 1051 East 200 North. Funeral Services will take place on Wednesday morning at 11:00 at the Cascade 4th Ward Chapel, 1051 East 200 North, with a viewing from 9:45-10:45 am prior to the services. Friends may offer condolences at www.premierfuneral.com. Interment will be at Orem City Cemetery. A memorial fund in Jeremy’s name has been set up online. Please visit http://www.gofundme.com/66nffw if you’d like to make a donation.

JEREMY HADLEY (January 5,1985- January 10, 2014) The world grew a little dimmer today with the passing of our beloved brother, son, uncle, and friend, Jeremy Hadley. It&#8217;s hard to put into words the impact that an extraordinary... View Obituary & Service Information

The family of Jeremy Hadley created this Life Tributes page to make it easy to share your memories.