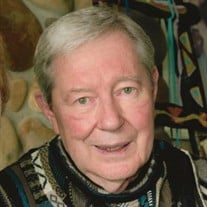 Jerome John (Jerry) Breiter passed away of natural causes in Salt Lake City, Utah on April 17, 2021. He was 84 years old. Jerry was born in Vandergrift, PA on September 9, 1936, to John K. and Virginia (Smolukas) Breiter. He attended Penn State University, where he earned a Bachelor's of Science degree in Chemistry in 1958. He then attended graduate school at Purdue University, achieving a doctorate degree in Organic Chemistry in 1961. He moved with his family to Wilmington, DE in 1962 and was transferred to Fairfax, VA in 1970. After a long and successful career in the chemistry and lobbying industries, Jerry retired as a Vice President of the American Meat Institute in 2000. Upon his retirement, he and his wife Antoinette (Toni) moved to Park City, UT. Jerry and Toni shared a love of travel and went to many places around the world. They visited Machu Pichu, climbed the Pyramid of the Sun in Mexico, walked the Great Wall of China, visited the Galapagos Islands and shared so many other adventures. Jerry and Toni were happily married for 62 years. Jerry loved golf and all things Penn State. Many of his relatives, including two of his children, followed Jerry to Penn State, and shared his passion for the Nittany Lions. Jerry enjoyed classical, choral and folk music. He also supported the theater and other arts. Above all, Jerry loved his family and was extremely proud of the accomplishments of his wife, children and grandchildren. Jerry was preceded in death by his daughter Karin. He is survived by his wife, Toni, daughter Kirsten Johnson (Steve), son Karl (Cathy), granddaughters Danielle and Megan Breiter, brother Dennis, as well as many extended family and friends. Final arrangements to be conducted by Premier Funeral Services (Salt Lake City, UT) with a memorial service to be held at a later date. If you wish to remember Jerry, please consider a donation to the Lymphoma and Leukemia Foundation or your favorite performing arts organization.

The family of Jerome John "Jerry" Breiter created this Life Tributes page to make it easy to share your memories.

Jerome John (Jerry) Breiter passed away of natural causes in...