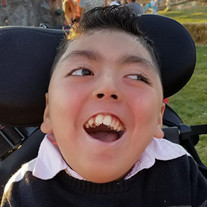 Jerrald Valero, age 14, passed away peacefully, May 25, 2019. Born July 15, 2004 in Salt Lake City, Utah to David Alejandro Valero and Diana Mayhen Labrador. Jerrald was unique in the world. He became one of the greatest children of our Heavenly Father, since his early life Jerrald showed us how strong we can really be. From the moment he arrived into this world his medical struggles began, but he always pulled through, no matter how many exams, spinal taps, or countless blood tests and X-rays he never complained, and almost never cried. Jerrald always endured and showed us how to be completely dependent and trusting of his caretakers; with just a smile on his eyes, he gave his parents reassurance that everything would be okay. Jerrald attended Kaurie Sue Hamilton Elementary School in Riverton, Utah. Jerrald always made others feel happy and protected; he is his family's Guardian Angel. He helped his family appreciate the little things in life. Each time he smiled or laughed it was a moment of pure joy and happiness for his entire family. Though he never spoke with words he always knew what happened around him and for those that spoke his language he made himself understood. Though his departure was unexpected and sudden he by far exceeded the lifetime medically given him, and he leaves behind a deep empty space on each of the people that he was surrounded by. His parents and sister will always carry him in their hearts. Jerrald will always be remembered as a special, strong and chosen spirit of our Heavenly Father who has now returned to His presence and is now able to do all the things his body was not capable of doing here on earth. Jerrald is survived by his parents, David and Diana and sister Kaithlyn Nicole. Services will be held at 11:oo am, Thursday May 30, 2019 at the Jordan View Ward, 1165 West 2320 South Salt Lake City, UT. 84119, with a viewing to begin prior to the funeral service at 10:00 am. Burial to follow at Elysian Burial Gardens, 1075 East 4580 South, Salt Lake City, Utah.

Jerrald Valero, age 14, passed away peacefully, May 25, 2019. Born July 15, 2004 in Salt Lake City, Utah to David Alejandro Valero and Diana Mayhen Labrador. Jerrald was unique in the world. He became one of the greatest children of our Heavenly... View Obituary & Service Information

The family of Jerrald Valero created this Life Tributes page to make it easy to share your memories.