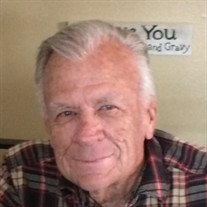 Jerry Lee Thomas 1937 - 2017 FERRON-Our beloved husband, father, grandfather, and friend, Jerry Lee Thomas, age 79, passed away peacefully at his daughter’s home surrounded by his family on May 5th, 2017 after a long and courageous battle with cancer. Jerry was born July 2, 1937 in Ferron, Utah to John and Minnie Faser Thomas. He enjoyed hunting, fishing, gardening and the outdoors. He married his sweetheart, Sadie Toinette Noyes, on Sept. 5, 1964, and they sealed their marriage eternally in the Manti Temple on June 20, 1973. They had 4 children together which are the pride and joy of his life. Jerry served as an operations clerk in the Army from 1960-1963. He was stationed in France for most of his service. After his service he eventually took a job with the Bureau of Land Management as a cadastral surveyor and worked there faithfully for 45 years. He still holds the record for accuracy and number of miles surveyed in the BLM. He was always willing to help those in need and in 1967 he saved a man’s life by carrying him 10 miles out of a canyon after a helicopter crash. He took great pride in preparing the Field of Flags each year at the Peach Days celebration. He was proud of the soldiers who fought for our country. We will miss his whistling, humor, and biscuits and gravy. Jerry is survived by his wife, Toinette Thomas, Ferron, Utah; 4 children, Cherie (Jim) Terry, Simpsonville, South Carolina; JeriLyn (Davin) Stilson, Pleasant Grove, Utah; Michael (Tamara) Thomas, Layton, Utah; Brandon (Natalie) Thomas, Vernal, Utah; 15 grandchildren; and 6 great-grandchildren; and siblings, Gordon Thomas, Ray Thomas, LaRue Harvey, and Norma Cloward. He was preceded in death by his dear parents, John and Minnie Thomas, and beloved brother and sister, Gale Thomas and June Brown. Funeral services will be held 2:00 pm, Saturday, May 6, 2017 at the LDS church, 555 South 400 West, Ferron, UT. The family will receive friends and family at the church starting at 12:00PM prior to the service. Interment, Ferron Cemetery, Ferron, UT. In lieu of flowers, memorial donations may be made to the Huntsman Cancer Foundation at donate.huntsmancancer.org

The family of Jerry Lee Thomas created this Life Tributes page to make it easy to share your memories.