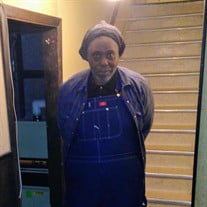 IN LOVING MEMORY JESSE LEE WALLACE June 30, 1967 - July 9, 2021 Jesse Wallace, 54, passed away suddenly on July 9, 2021 at his home in Ogden, Utah. Jesse was born June 30, 1967, to Eugene and Della Clarece Brewster Wallace, in Ogden, Utah. Jesse grew up in Ogden and graduated from Ogden High School in 1986. After his mom’s death, Jesse lived with his father Eugene his entire adult life. He and his dad were very close. Jesse always wanted to do things just as his dad had done. Unfortunately, his dad passed away in December 2006. Jesse then lived with his Aunt Minnie, whom he cared for a great deal. He was very involved with her home-care along with Hospice before she passed away. There wasn’t anything he wouldn’t do for her and the family. Jesse was kind to everyone. His quiet spirit was a great comfort to everyone he knew and loved. Jesse’s favorite pastime was walking to Evergreen Memorial Park Cemetery to visit with his dad. It brought him much joy. He was preceded in death by: grandparents, Doc and Louisiana Wallace; parents, Eugene and Della Wallace; sisters, Sarah Wallace Solomon and Mary Wallace; aunts, Minnie Lee Wallace, Lucille Wallace, Mary Wallace; uncle, AD Wallace; 1st cousin, Jessie Mae Lyons. Jesse leaves to cherish his memory: brother, JW Warren (Louisiana); nieces, Diane Solomon (Ohio), Daphne Wallace (Ohio), Sherri Wallace (California), Leah Wallace (Utah); nephews, Kenneth Wallace (Ohio); 1st cousins, James and Sherrell Wallace (Oklahoma); 2nd cousins, James Wallace, Jr. (Utah), Anthony Lyons (Utah), Nicole Wallace (Texas). A private burial will be held on July 26, 2021 at Evergreen Memorial Park in Ogden, Utah, under the direction of Premier Funeral Services of Roy, Utah. A viewing is scheduled for 10am and graveside service will begin at 11am. Sweet Jesse, we will always love and miss you very much. May you rest in peace with your father and most of all your Heavenly Father, Jesus Christ. - Your loving family A special thank you to family friends. Kenneth Chugg, was always there for Jesse and to help take care of his needs. Jesse knew he could always depend on Ken. They formed a loving friendship of trust from being around each other so often. Thank you for your constant dedication and loyalty. We love you, our brother. Miss Teri Hill, was helpful in getting Jesse to talk and open up more around people. She always encouraged him, took care of his personal errands, and drove him to different locations when needed. They became good friends during Jesse’s lifetime. Pastor Charles Petty of Second Baptist Church of Ogden. Thank you for your prayers of love and encouragement.

The family of Jesse Lee Wallace created this Life Tributes page to make it easy to share your memories.