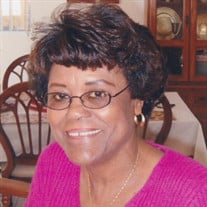 A Life Well Lived Jewelean “Granny” Brown September 14, 1942- February 11, 2022 And I said, “Oh that I had wings like a dove, For then would I fly away, and be at rest” Psalm 55:6 On Friday, February 11, 2022, at 7:02 am while surrounded by her family, Jewelean Brown gained her wings and entered into eternal rest after accepting the call of her Heavenly Father. She was born in Hugo, Oklahoma on September 14, 1942 to the parents of Sam “Goings” Jones and Annie Jones. She was born the eighth (8th) of 12 children. She was raised in a Christian home and was taught the word of God and accepted the Lord Jesus Christ as her Lord and Savior at an early age. Her family later relocated to Edwardsville, Kansas. In 1960, Jewelean graduated from Sumner High School and continued her education at Kansas State College in Pittsburg, Kansas studying Physical Education where she maintained academic excellence. Jewelean pledged and became a member of Alpha Kappa Alpha Sorority Inc. during her time in higher education to showcase her love of sisterhood, making connections, and uplifting her community. After her schooling, Jewelean relocated to sunny California where she was married to Ronnie A. Brown Jr. at Camp Pendelton, California. To this union, the joys of her life were born: Anthony Randolph and Robin Alys. Ronnie brought to this family Terri LaCheryl, who Jewelean loved and raised as her own. She resided in California from 1960 through 1999. In California, Jewelean took an interest in business and accounting, which lead to her years of civil service for City of Los Angeles. She cherished her days working for the city and truly enjoyed it. She retired from The City of Los Angeles as an accounting records supervisor in 1999. Jewelean became a member of The Rose of Sharon, Order of the Eastern Star, where she continued to serve her community through volunteer work and helping the disenfranchised. She served the Rose of Sharon Chapter as the Worthy Matron and as a Past Matron for many years. Jewelean moved to West Valley City, Utah in 1999 to be closer to her son, daughter and grandchildren. She quickly became bored with not being of service to her community and began working part-time for Granite School District mentoring trouble youth. She served the Granite School District for more than twenty years and retired from this position in the year 2020. Jewelean was a fixture at the many youth sporting leagues that her grand children participated in. She quickly became mom to many parents and Granny to nearly all the kids. She cherished the relationships she had with all of her adopted kids and grandkids, who remained an important part of her life until the very end. Jewelean is preceded in death by her parents Sam (Goins) Jones and Annie Jones, her sisters, Elnora, Ceola, Emma, Ella Mae, Louisa and Shirley, her brothers, Lee Curtis, Leroy, and Sam Jr. She has left an indelible impact to be cherished and remembered by her daughter Terri LaCheryl Ivy and son-in-law LC, son Anthony and daughter-in-law Lillian Brown, daughter Robin Henry, Granddaughters Breanna Ivy, Tantania Brown, and Aalyah Henry. Grandson Clarence R. Henry II, daughter-in-law Tracy Brown, sisters Barbara Johnson and Mae Lois Minor, brother Franklin Jones, and a host of nieces, nephews, cousins and friends. Funeral services will be 11:00 am, Tuesday, February 22, 2022 at Calvary Baptist Church, 1099 South State St., Salt Lake City, Utah where a viewing will be prior to services Tuesday from 10:00 am to 11:00 am. A viewing will be held from 6:00 to 8:00 pm, Monday, February 21, 2022 at Premier Funeral Services, 67 East 8000 South, Salt Lake City, Utah. Interment will be Tuesday following services at Mount Olivet Cemetery, 1342 East 500 South, Salt Lake City, Utah.

The family of Jewelean Brown created this Life Tributes page to make it easy to share your memories.