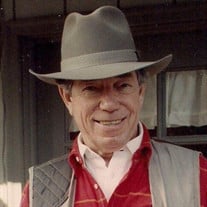 Jimmie Garth Derricott passed away on January 31, 2022, surrounded by family and loved ones. He will be remembered as a loving husband, father, and grandfather. Jim was born on February 18, 1931, in Montpelier, Idaho. After high school, Jim joined the United States Navy; he is a Veteran of the Korean Conflict. He married his sweetheart, Jeanine Lella Dana on September 1, 1956. Jim and Jeanine had three children: Kim, Lori, and Lana. In Jim’s early years, he loved the outdoors of Eastern Idaho. Some of Jim and Jeanine’s fondest memories were welcoming friends and family to their Caldwell, Idaho, home, where everyone felt welcomed and loved. Jim worked for Intermountain Gas Company for over 30 years and retired as Vice President of Operations. Jim and Jeanine enjoyed a few blissful years of retirement before Jeanine was diagnosed with cancer. Jim learned true love and compassion as he tenderly cared for his wife. Jeanine passed away on August 18, 2000. Jim Derricott and Jeanine Dana Derricott were sealed for time and eternity in the Boise Temple on August 18, 2001. Jim began another chapter of his life when he married Jeannie W. Stringam on April 12, 2002. They enjoyed many adventures traveling to distant places during their golden years. Jim was preceded in death by his wife, Jeanine Dana Derricott; his parents, James Rolla and Vera Derricott; and two siblings, Gaye and Terry Derricott. He is survived by his wife, Jeannie Stringam Derricott; his sister Loye (Jim) Rich. His children; Kim (Wendy) Derricott, Lori (Martin) Baird, and Lana (Rob) Lewis; his stepchildren: Tanya Jones, Troy (Michele) Stringam, Tricia (Ross) Remington, Travis (Margi) Stringam, Tad (Tami) Stringam, Taryn (Doug) Eastman and Taylor Stringam. Jim has 30 grandchildren and 24 great grandchildren. A memorial service will be held in Star Valley, Wyoming.

Jimmie Garth Derricott passed away on January 31, 2022, surrounded by family and loved ones. He will be remembered as a loving husband, father, and grandfather. Jim was born on February 18, 1931, in Montpelier, Idaho. After high school, Jim... View Obituary & Service Information

The family of Jimmie Garth Derricott created this Life Tributes page to make it easy to share your memories.