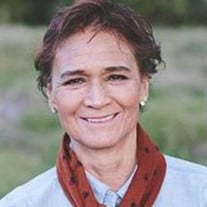 JoAnn “Lita” Loosle Bessey took her final earthly breath on January 4, 2015 after a long, painful battle with pancreatic cancer. She passed away surrounded by the ones she loved and cared for most, her family. JoAnn was born in Phoenix, AZ on Oct 24, 1958. She grew up in various parts of the world with her parents and five siblings. In 1975 she moved to Ephraim, UT and graduated from Manti High School. In 1977 she married Karl Bessey and spent the next thirty years in Ephraim raising her three children, Jaqueline, Rachel and Sean. JoAnn was very civic-minded and always put her community and others before herself. She helped manage the local Sub-for-Santa for years and did a tremendous amount of work serving Ephraim’s Latino community. Being bilingual, she assisted many families to bridge language and social barriers and become integrated in the schools and the community. But it went much deeper than mere language assistance, JoAnn loved her community and the feeling was mutual. Professionally, JoAnn worked many years in Sanpete County public schools, Utah Migrant Council, At Risk and Big Brother/ Big Sister Coordinator and also worked with Ephraim City and it’s cemetery board to restore the old Pioneer Cemetery north of town and other community projects. In recognition of her commitment and compassion JoAnn was honored with a “Service Above Self “ award from the Ephraim Rotary Club in 1990. JoAnn loved the great outdoors, especially hiking. She spent countless hours hiking the deserts and mountains of Utah. She loved gazing skyward and referred often to the “spiritual power” of nature. Most of all she loved sharing nature with others, and often hiked with a best friend or with one or all of her children at her side. JoAnn always put family first. Even after a terminal diagnosis she walked her grandkids to school until the pain became too great. JoAnn taught her children well. She spent her final months living with her daughter and son in law and was watched over and cared for by her children and grandchildren to the very end. JoAnn touched so many lives, and it was never more obvious than in her final months. The family would like to thank all who visited her at the open house in Ephraim, visited her in St George, or sent letters, cards, flowers, well wishes, and prayers. Facing a life cut short at 56 it gave her a sense of having lived fully to know she would be missed by so many. JoAnn is survived by her children Jaqueline Lerner, Rachel Bessey and Sean Bessey. She also leaves behind three grandchildren Braxton, Jace and Jada Lerner, a fourth grandchild due in February to Sean and Katie Bessey, her father Lyle Loosle, brothers Robert, Ronald, Richard, Ray Loosle and sister Patricia Hartzell. Preceding JoAnn in death is her mother Maria Loosle and her infant son Adam Bessey. Services will be 11:00 am, Saturday, January 10, 2015 at the Snow College Eccles Performing Arts Center, 300 East Center Street, Ephraim, Utah with a viewing prior to services from 9:30 to 10:45 am.

JoAnn &#8220;Lita&#8221; Loosle Bessey took her final earthly breath on January 4, 2015 after a long, painful battle with pancreatic cancer. She passed away surrounded by the ones she loved and cared for most, her family. JoAnn was born... View Obituary & Service Information

The family of JoAnn "Lita" Loosle Bessey created this Life Tributes page to make it easy to share your memories.