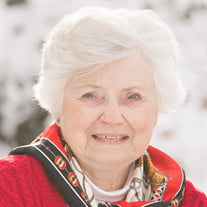 Joan Yancey Barlow 1935 - 2018 Joan Yancey Barlow died June 11, 2018 at her home in Lindon, Utah from complications of Metastatic Ovarian Cancer. Joan was born June 21, 1935 in Salt Lake City to Hugh Hyde and Elinor Mae Miller Yancey. The family moved to Los Angeles in 1941 where she went through school attending Marlborough School, Stanford, and then the University of Utah, from which she graduated in 1958 with a degree in Elementary Education. She met her husband, Lynn B. Barlow, while working at the Bureau of Information at the Los Angeles Temple. They married a year later and returned to Utah where her husband finished his undergraduate work at BYU then medical school at the University of Utah. Many happy years followed as they raised their six children at Minot A.F.B, North Dakota, Hollywood, and Chatsworth, Calif. before returning to Utah. Joan worked as a school teacher before and after her children were raised and with her husband in his pediatric offices. She was anxiously engaged in genealogy research for 58 years. Joan was a member of the LDS Church, held many callings and served as a recorder in the Mt. Timpanogos Temple with her husband until August. She holds her testimony of Jesus Christ to be one of the treasures of her life. She was preceded in death by her parents, her infant daughter Jennifer and a grandson Ken. She is survived by her husband, her sister Elinor Nielson (Ken), and children Leslie Randle (Quint), Lynn II (Heidi), Peter (Wendy), Whitney Ramboz (Bryan) and Scott (Saori); 18 grandchildren and 10 great-grandchildren. Funeral services will be 11:00 am, Monday, June 18, 2018 at the Lindon Central Stake Center, 56 East 600 North, Lindon, Utah where a viewing will be Sunday from 6:00 to 8:00 pm and Monday prior to services from 9:00 to 10:30 am. Interment in the Lindon City Cemetery. Our family would like to thank Collette Johnson, RN and Erin Nolte of First Choice Hospice for their excellent and loving care; Drs. John R. Edwards, Brandon M. Barney and their teams; and Utah Valley Hospital’s Neuro Trauma Rehabilitation Center.

The family of Joan Yancey Barlow created this Life Tributes page to make it easy to share your memories.