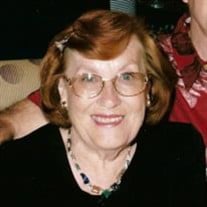 Joan C. Barrett November 27, 1933 - April 9, 2020 Joan C. Barrett, 86 died from Alzheimer’s on Thursday April 9, 2020 at her home in Pleasant Grove, Utah. Her husband of 68 years, K.C. was at her side. Joan was predeceased by her brother, Randall and her son-in-law, Jack. She was survived by her husband K.C. and their three children DeAnn, Michael (Corinne) and Lisa (Stephen) and four grandchildren Kyle (Alexia), Brian (Ashley), Jacob (Virginia) and Samantha (Dustin) and five great grandchildren. Joan was born on November 27, 1933 in Heber, Utah to Ruel and Matilda (Davis) Carlile. Joan and her younger brother, Randall lost their father to cancer. Matilda later married Grant Stevenson. When Joan was 11 the family moved to Mountain Home, Utah where they owned and operated Stevenson’s Cash Store. Joan attended school in Mountain Home until high school where she graduated valedictorian in Altamont. Joan married her high school sweetheart, K.C. Barrett on November 24, 1951. During the next several years they lived in Ogden and then Provo. Joan worked at different insurance companies while K.C. worked and attended Weber State College and BYU. The family then started a new adventure moving to Chicago, IL where K.C. attended Loyola dental school and Joan continued to work. When K.C. graduated dental school he was commissioned as an officer in the military. Joan was now able to be a stay at home mom to her three children. She continued to raise and strengthen her family during the many assignments around the United States and abroad. Joan was an avid reader and had a thirst for knowledge. She enjoyed expanding her mind by doing puzzles, games, trivia, listening to music and loved mysteries. Joan loved to shop with family and friends always looking for a good bargain. Joan was a loving and caring person to her family and friends. She always had a smile for you and always made time to listen. While helping her husband serve in the military Joan worked tirelessly serving on committees, volunteering and helping with organizations which included being a worker on a crisis line. During retirement Joan and K.C. continued their love of travel, visiting many wonderful places including Australia, China, Japan and all over the United States. Joan enjoyed visiting her children and their families as well as old friends. She enjoyed working on their home in Utah and continued to be involved in her community. Joan was a great caregiver, taking care of her brother for many years and her mother in law. Trials of macular degeneration, arthritis, hearing loss, and Alzheimer’s she was extremely grateful to the comfort and care that K.C. gave her in her final years. She will truly be missed. A private celebration of her life will be held at a later date.

The family of Joan Carlile Barrett created this Life Tributes page to make it easy to share your memories.