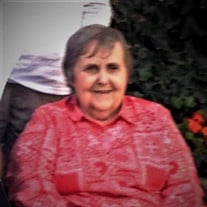 Joan Summers Holder 11/24/1931 - 1/04/2021 Joan Summers Holder passed away peacefully at home on January 4, 2021, surrounded by family. She was born November 24,1931 to Marion and Edythe Summers of Tremonton, UT. Joan was a student body officer for Bear River High School's Class of 1950. She attended college at Utah State University in Logan. Joan moved to Salt Lake City, taking the position of Office Manager at F.G. Ferre & Son Automotive, their first female employee. It was there she met Larry Holder. They married in April 1961, and raised five children. They later divorced. Joan and Larry started Alta View Kennels, producing several generations of prize winning Newfoundlands. Joan served for years as a board member of the Intermountain Kennel Club, handling hospitality for Dog shows and club functions among other duties. Joan was an excellent seamstress and great cook, especially when it came to baking. She worked for Grand Central, later Fred Meyer stores, in several capacities. Joan was an enthusiastic and very vocal sports fan, particularly for Utah Jazz basketball and University of Utah football. She is preceded in death by her parents, brother Robert, sister in law Bonnie, and sister Lois. Survived by David & Kaye Summers, Kathy & Steve Green, her children, Mike, Jeff, Nancy (Gary) Pinnell, Brad (Connie), and Scott, grandchildren Jessie (Anthony )Pedersen, Vivian Pinnell, Ben and Maddie Holder, and great grandsons Atlas and Jude Pedersen. A family graveside service will be held, with a Celebration of Life to be scheduled when quarantine restrictions have been lifted. In remembrance of Joan's life, the family asks that any charitable donations be made to a gofundme page set up for her great grandson Jude's medical expenses. Donations can be made at https://www.gofundme.com/f/help-baby-jude-receive-a-bone-marrow-transplant?sharetype=teams&member=5256882&utm_medium=copy_link&utm_source=customer&utm_campaign=p_na%20share-sheet&rcid=c1e6aec99c094f28a71f7d9b705a4df3&fbclid=IwAR363xSUXY0poD_UC-NzT6td1QLCYnntYUBVa-rQRDwDFTWtws6zBy4tPZ8 Condolences can be sent to the family at www.premierfuneral.com

The family of Joan Summers Holder created this Life Tributes page to make it easy to share your memories.