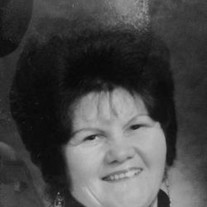 Our Beautiful Angel "Jo Jo" Joan Lee Bird Ledbetter On December 1st, 2014 God wanted one of his most precious angels and our Wife, Mother, Grandmother, Sister, Aunt and friend Joan Lee Bird Ledbetter to be home with him and out the pain she was in on this earth. Joan Lee Bird was born December 30th, 1941 in Fresno, California by the cotton fields, to Leo Elias Bird and Leon Charlotte O’Neill. She was the first of 6 children. JoAn lived the first years of her life in California, but they moved around due to her father playing baseball for the “B” leagues. When they did move to Utah, they lived in a tent until they could find a house to live in. She meet and later married Harry Joseph Ledbetter on December 15, 1962. After meeting him for the first time, she told her mother she would never marry such a crazy man. JoAn gave birth to her first son Rex in 1963. Then 3 years later on January 29, 1966 Tim came along. She raised her boys plus many other children in Bluffdale, Utah. JoAn spent her whole life raising and loving children. There are too many to name and yes they, where all her favorite. JoAn did not have any easy life, but she made the one she had more beautiful and precious than anyone could imagine. Everyone that ever meet her will never forget her laughter. JoAn never new an enemy everyone good or bad was loved by her. No one got away without a hug and kiss from her. Even if it was the very first time she meet you. She never had a harsh word to say about anyone. JoAn is survived by her husband of 52 years Harry Joseph Ledbetter, Son Rex Henry & Loa Dawn Ledbetter, Son Timothy Ledbetter, Grandsons, Russell & Jessica Ledbetter, Bryce & Chuy Ledbetter and Matt (Maverick) Ledbetter, 2 Great-Grandchildren, Karl & Kylee and one she is playing with in heaven that is due to be on this earth in July 2015. Sisters: Linda & Marv Dickerman, Gloria Ledbetter, Kay Peterson and Sheila & Verdell Parry. Brother: Dave & Diane Bird. Many wonderful Nieces and Nephews and all of the kids she cared for throughout her life. Funeral Services will be held on Saturday December 6th 2014 @ 11:00 am at the LDS Chappell on 6986 W McCuiston Ave. Herriman, Utah 84096, a viewing from 9:30-10:45 prior to services on the December 6th, 2014. Interment will be Pleasant Green Cemetery 9211 W 3381 S. Magna, Utah. The Family wishes to thank all of those who have been a part of JoAn’s life, and for the many condolences and donation received at this time.

The family of Joan Lee Ledbetter created this Life Tributes page to make it easy to share your memories.