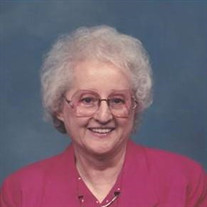 Joan Elizabeth Magill Liechty Passed away July 3, 2017 at Courtyard at Jamestown in Provo, UT. She was born August 2, 1926 in Auburn Illinois to John Ira and Elizabeth Marie McDougle Magill. She had two older brothers, Robert and John, and one younger sister, Jean. Shortly after graduating high school, she ventured west to Washington state. There she met and married Wesley John Liechty, and had three sons and one daughter. In 1968 she moved to Provo and attended Brigham Young University. There she earned a master's degree in English, and enjoyed teaching English courses at BYU. Joan later worked for the Federal Bureau of Reclamation as a writer/editor and wrote several reports for the construction of the Jordanelle Dam project. She took a leave of absence from her job to serve an LDS mission in the Germany Dusseldorf mission from 1980-81. After the completion of her mission, she returned to the Bureau of Reclamation until her retirement in 2007. Throughout her life, Joan enjoyed writing, family history, reading, biking, sewing, music and reading. She also took much joy in the Provo 4th of July parades and events. She also loved to visit family in Illinois, Washington and Oregon. She enjoyed serving in stake and ward Relief Society, and Young Women, and loved singing in the ward choir. She was Chairman of the American Cancer Society (Provo Utah Chapter). She had great compassion for those with physical limitations. Her children remember going with her many Sundays during their childhood, visiting neighbors and friends who had been afflicted with polio or cerebral palsy. Her greatest joys were her four children, twelve grandchildren and sixteen great grandchildren. Joan was preceded in death by her parents, siblings, and son-in-law, Jay Davis. She is survived by her children; Rick (Karen) Liechty, James (Christena) Liechty, Jean Davis, and Jeffrey Liechty, former daughter-in-law Cherlyn Liechty, twelve grandchildren, and sixteen great grandchildren. Private family services will be held.

Joan Elizabeth Magill Liechty Passed away July 3, 2017 at Courtyard at Jamestown in Provo, UT. She was born August 2, 1926 in Auburn Illinois to John Ira and Elizabeth Marie McDougle Magill. She had two older brothers, Robert and John, and... View Obituary & Service Information

The family of Joan Elizabeth Magill Liechty created this Life Tributes page to make it easy to share your memories.