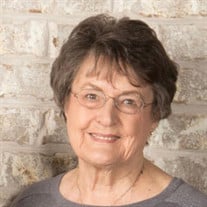 JoAnn VanLeuven Ludlow 1939 - 2019 JoAnn VanLeuven Ludlow passed away peacefully at home on February 5, 2019 in Sandy, Utah surrounded by loved ones. She was 79 years young. She was born February 28, 1939 in Payson, Utah. She grew up in Springville, Utah and attended Springville High School where she was a member of the cheerleader squad. She was the National Guard Queen in Springville. She attended Brigham Young University. JoAnn married Paul Ludlow in the Salt Lake Temple on May 16, 1958. They moved to Salt Lake City and soon settled in Sandy where they started their family. They have lived in Sandy for over 55 years. She worked at the FBI and Sandy City Fire Department. She served as President of the Utah Fireman’s Auxiliary. She was an active member of the Church of Jesus Christ of Latter Day Saints where she held numerous callings. Her most cherished times where spent in the mountains with her family and friends. You could always find her at her cabin throughout the summer. JoAnn loved following her kid’s activities and attended their many events. Later in life her most precious moments were spent her grandkids, Orson and Grace. Attending their sporting and dance events brought her the biggest smile. She was well known for her cinnamon rolls and her Christmas fudge. She is survived by her husband of 60 years, Paul Ludlow, daughter, Kelly (Garry) Colby; sons, Mark (Rochelle) Ludlow, Jason Ludlow and her favorites, her grandchildren, Orson Colby and Grace Ludlow. She had numerous friends throughout her life of whom she considered family. Our family expresses our heartfelt gratitude to Brighton Home Health and Hospice for the compassionate care that they gave her over the last several months. Special thanks to Jamie, Kathleen, Cassidy, Katie and all the nurses who provided tremendous care. Graveside services will be 11:30 am, Monday, February 11, 2019 at the Utah Veterans Memorial Park, 17111 South Camp Williams Road, Bluffdale, UT where a viewing will be held at the Veterans Chapel prior to the graveside from 10 to 11:00 am. In lieu of flowers, please donate to your favorite charity in her honor.

The family of JoAnn VanLeuven Ludlow created this Life Tributes page to make it easy to share your memories.