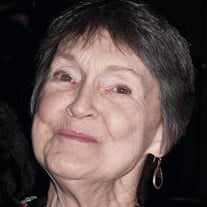 Daughter of Benjamin Franklin Blackledge and Vivien Alford Blackledge, Jo was born in Sheridan, Wyoming. She married Thomas Conrad Brandt on June 9, 1946. Jo was preceded in death by her husband, her parents, her brother and his wife, James and Jean Blackledge, her daughter Chris Hall, her son Carl Brandt, her grandson Andy Brandt and her great granddaughter, Trinity Jean Pierre. She is survived by her son, Conrad Brandt (Linda), her daughters Libby Lowther (Brent) and Rebecca Hample (Chris), her grandchildren Jenny Hall, Erin Barrett, T.J. Lowther (Caitlin), Eric Hample and Anika Hample, her brother Richard (Jan) Blackledge and sister Zoe (Bill) Kugler. A resident of Salt Lake City most of her life, Jo volunteered many hours as a member of the League of Women Voters—including a term as President—in addition to raising her family. Fiercely devoted to social and political issues, Jo was elected to the Utah House of Representatives, and then appointed by the governor as Director of Utah Consumer Protection Division. She continued to serve Utah full-time for over 20 years working in various positions for the Real Estate Division and the Utah Attorney General’s office. A compassionate advocate for crime victims participating on the Utah Crime Victim’s Council, she also was active in many other community organizations, and was recipient of numerous awards in recognition of her service. Jo enjoyed dancing with Tom, the symphony, opera, theatre, and extensive travel. Friends are invited to join family at an open house celebrating Jo’s life on Saturday, August 20 between 1 and 4 PM at First Baptist Church, 777 South 1300 East, Salt Lake City, Utah. The family would be honored to have memories and photos of Jo shared by attendees. Donations in Jo's honor can be made to the YWCA Women’s shelter. There will be private interment at Fort Douglas Cemetery.

Daughter of Benjamin Franklin Blackledge and Vivien Alford Blackledge, Jo was born in Sheridan, Wyoming. She married Thomas Conrad Brandt on June 9, 1946. Jo was preceded in death by her husband, her parents, her brother and his wife, James... View Obituary & Service Information

The family of JoAnne (Jo) Blackledge Brandt created this Life Tributes page to make it easy to share your memories.