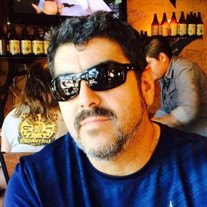 Joe Anthony Gonzales, 61, of Clinton, Utah, peacefully passed away on August 3, 2019, surrounded by his adoring wife, loving mother and loyal son as well as the vast amount of love by the rest of his family and friends. Joe was born to parents Joe R. and Olga M. Gonzales (Pooler), on July 21, 1958, in San Antonio, TX. Joe graduated from Layton High School in Layton, Utah where he was an exceptional wrestler and great friend to many. In March 1980, Joe enlisted in the United States Air Force where he served his country with honor and was highly decorated for his performance until his retirement in May of 1995. Joe then continued his exceptional service to the nation as a civilian employee at Hill Air Force Base in Utah and retired in March 2016 after a distinguished second career. Joe married his best friend and soulmate Esther Lopez Gonzales on June 28, 2008. Together, Joe and Esther enjoyed traveling throughout the West making many new friends and having interesting adventures. Joe’s family and friends appreciated his endless teasing, pranking and story-telling. He always relished making others laugh and his teasing was his way to show affection. He enjoyed playing and watching sports, especially football, racquetball, basketball, golf and fishing. He liked to work with wood, making things that were helpful around the house or yard. Joe was also an avid collector of many things but especially he loved to collect music, sports memorabilia and children’s toys. Joe’s real passion though was his unwavering support for the Dallas Cowboys and he wanted everyone to know that they are going to win the Super Bowl this year! Joe is survived by Esther, his devoted wife of eleven years; his mother Olga M. Pooler; his father Joe R. Gonzales; sister Patricia (Stan) Mayo; brother Michael (Pam) Gonzales; and sister Rebecca Fuller. He is also survived by his children, Jeremiah Gonzales, Brandon Gonzales, Angela Wilson, Jennifer McGregor and Andrew Gonzales. Lastly, Joe is survived by his fifteen grandchildren and numerous nieces, nephews and other extended family and friends. The memorial service will be held on Friday, August 9, 2019, at 2 p.m. at the Utah Veterans Cemetery & Memorial Park (17111 S. 1700 W., Bluffdale, UT 84065). Immediately following the memorial, the family invites you to attend a potluck celebrating Joe at the Seventh Day Adventist Church at 2125 West 9000 South West Jordan, Utah 84088. The family requests that those who can, make donations to the VA or to a veteran’s care facility of their choice.

Joe Anthony Gonzales, 61, of Clinton, Utah, peacefully passed away on August 3, 2019, surrounded by his adoring wife, loving mother and loyal son as well as the vast amount of love by the rest of his family and friends. Joe was born to parents... View Obituary & Service Information

The family of Joe Anthony Gonzales created this Life Tributes page to make it easy to share your memories.