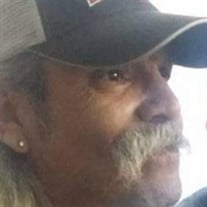 Joe Gilbert Linan, passed away Saturday August 21, 2021 after his brave battle with Covid-19. He was surrounded by many loved ones as he broke free from the world giving meaning to “I’m as free as a Bird now” while the song played as he took his final breaths. Joe was born in Dawson, TX, to Juan Vega Linan and Clara Mejias on July 2, 1958. Joe’s family including his brother Jesse Linan and sister Mary Linan moved to Indio, CA, where he attended Indio High School. Joe later enlisted in the US Army, where he was a part of the Artillery 155 Howitzer Unit for 3 years. After the military Joe became a lover of life, following adventures wherever they took him. Joe has two daughters from previous relationships, Amber Linan and Jennifer Germic. Joe married the love of his life Barbra Jean Taylor on November 14, 1987 in Palm Springs, CA. Joe and Barbie have three children; Jesse Linan, Steven Linan, and Kimberly Linan. Joe moved his family to Payson, UT in 1989, where he found work in construction and labor. Outside of work he loved to tinker and rebuild things, he would spend hours outside taking things apart and either putting them back together or building something completely new. You could always find him playing sports, Basketball, Softball, and Football; But where he found absolute joy was bowling and cornhole. Joe became known as Cheech by all those who knew him, and he’ll always be remembered for his laughter and kindness. Cheech brought happiness to anyone he crossed paths with. Whether he was opening his home to someone in need, providing guidance and advice, or just giving a much needed genuine hug, Cheech was generous and he loved unconditionally. He is preceded in death by his mother Clara Mejias, and niece Heather Linan. He is survived by his wife Barbra Linan, children Amber Linan, Jennifer Rawlinson, Jesse Linan, Steven Linan, and Kimberly Linan, Brother Jesse Linan (Rhonda Linan), Sister Mary Milano (John Milano), many nieces and nephews, 12 grandchildren, best friend Cass Spencer (Tiffany), and many many more friends and loved ones who will forever love Joe “Cheech” Linan. In lieu of a funeral, the family will be holding a Celebration of Life on Sunday, November 14, 2021 at Exchange Park in Provo, UT, permitting decent weather. His ashes will be placed with his mothers remains the following Monday in American Fork, UT. Donations to help the family with expenses can be made through Kimberly Linan or Jennifer Rawlinson. Condolences can be sent to the family at www.premierfuneral.com

Joe Gilbert Linan, passed away Saturday August 21, 2021 after his brave battle with Covid-19. He was surrounded by many loved ones as he broke free from the world giving meaning to &#8220;I&#8217;m as free as a Bird now&#8221; while the song... View Obituary & Service Information

The family of Joe Gilbert Linan created this Life Tributes page to make it easy to share your memories.