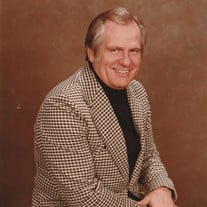 John Mack Barlow passed away Sunday evening May 30, 2021 at his home in West Valley City. His loving wife and best friend of nearly five decades, Sondra, was by his side along with other members of his family. John will be missed by many. John was born to Albert and Kate Barlow on October 20, 1937. He was preceded in death by his first wife of 13 years, Anna Lee Harper, with whom he had five children; Dave (Lisa), LaNette (Mike), Kayleen (late husband Mark), Eric (Julie), Michael Kurt who preceded his father in death and will be leading the Lord's welcoming committee. John was also father to Mike Anderson (Tracy), with whom they shared a home in West Valley for many years. John was a natural salesman. He had an easy smile, a strong handshake, and an uncanny ability to connect with people. John possessed strong self-confidence and an ability to convince you of what you “needed”. He used those skills to win national sales awards and make many friendships throughout his lifetime. John grew up in Salt Lake County and lived there most of his life. Much of his identity was gained from his strong Mormon pioneer heritage. He graduated from Murray High School where he was a star football player. John never lost his love for football; he was an avid Utah Utes fan and a proud Denver Broncos fan. He loved holding season tickets to attend Utes games with his family. John was a blessing to us all. He loved us and was very proud of all of us. He himself was blessed beyond measure and lived a full life. He would often say, “I have more children and grandchildren than I can count.” Thank you, John, for being our husband, father, grandfather, and friend. We love you and we will miss you for a short while until the Lord returns or we meet you at the crossing of the Jordan. We look forward with great hope and anticipation to our reunion ahead. Viewing for John Mack Barlow will be held Friday, June 4th, 2021 from 10 a.m. to 11 a.m. at Premier Funeral Services - 67 East 8000 South, Midvale, Utah 84047. Graveside service directly following viewing, 11:30-12:00 noon at Memorial Redwood- 6500 South Redwood Road, West Jordan, Utah 84129. Online condolences may be left at www.premierfuneral.com

John Mack Barlow passed away Sunday evening May 30, 2021 at his home in West Valley City. His loving wife and best friend of nearly five decades, Sondra, was by his side along with other members of his family. John will be missed by many. John... View Obituary & Service Information

The family of John Mack Barlow created this Life Tributes page to make it easy to share your memories.