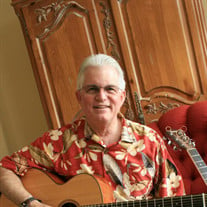 John Forrest Brandeburg Jr 1941 - 2019 John Forrest Brandeburg Jr. was born on July 30, 1941 in Kentfield, California, the son of John Forrest Brandeburg and Elizabeth Neely Rogers. He passed away on February 15, 2019 in the comfort of his South Jordan, UT, home surrounded by his family. When John picked up a guitar at the age of 18 he discovered a passion that he would pursue for the rest of his life. A talented fingerstyle guitarist, he performed country blues and ragtime guitar with various bands eventually settling into a trio called The Perfect Crime. John’s move to Utah signaled the end of nearly 5 decades of playing together. In addition to playing he also taught many students, introducing them to the artists that had shaped his musical tastes and particular style of playing. Having arrived in Utah he slowly began to expand his musical base. He began playing open mics, house shows and teaching new students, spreading the music that he loved to new audiences. John was also a beloved teacher, having taught elementary school in the Bennett Valley School District for 30 years until his retirement in 2004. His stories, class jug band, field trips, and unique curriculum became the stuff of legends. His teaching extended beyond his students as he coached and mentored new teachers, helped coordinate student councils, directed the school district’s Outdoor Education program, and helped to develop and implement curriculum. His love of teaching continued beyond the classroom as he mentored and tutored students in their educational pursuits long after his retirement. An avid outdoorsman, John was often found fly fishing in streams and rivers, and taking family on camping trips throughout the western US. The Klamath river will forever hold a special place in the memory of his family as the site of their summer pilgrimages and fishing trips. John was an active member of The Church of Jesus Christ of Latter Day Saints who faithfully ministered to those he was called to serve in each position that he held. His powerful testimony of the gospel guided his course in life, bringing him peace in his final days and a knowledge that he would see his family again. He often spoke of the brotherhood that he developed with those that he served with, his deep faith in Jesus Christ, and the lessons that his friends continued to teach him. He is survived by his wife Barbara Brandeburg, his sons Jaime Brandeburg and Travis Neely, his daughter Katie Sellers, their spouses Amber Neely and Daniel Sellers, and his grandchildren, Scott, Tyler, Hunter, Sierra, Johanna, Eden, and his siblings Michael Brandeburg and Cathie Poncia. Funeral services for John will be 11:00 am, Saturday, February 23rd 2019 at the The Church of Jesus Christ of Latter Day Saints chapel located at 10344 South Kestrel Rise Rd, South Jordan, Utah where a viewing will be prior to services from 9:45 to 10:45 am. Interment and graveside services will be 2:30 pm, Saturday, February 23, 2019 at Elysian Burial Gardens, 1075 East 4580 South, Murray, Utah.

The family of John Forrest Brandeburg Jr created this Life Tributes page to make it easy to share your memories.