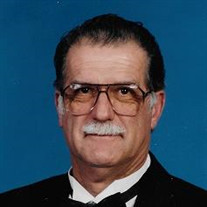 John David Field, 83, passed away May 19, 2019. He was born in East Hampton, New York on March 22, 1936 to Russell and Louise Field. He was raised and graduated from high school on Long Island. John married Loretta Schow on April 8, 1967 in Virginia City, Nevada. They cherished their stories of being married behind the Silver Dollar Queen. They renewed their vows on their 25th wedding anniversary in the same location, just as John had promised. They have been sealed to one another in the Oakland Temple. They raised their children to love and celebrate life to the fullest, with trips to the Santa Cruz Beach Boardwalk, Lagoon, Vasona Park, or anywhere they all could enjoy a picnic. The family enjoyed being together at BBQs, games, especially horseshoes, and being by the water, until the sun had set for the day. John had learned to fish when he was a young man and later became a meat cutter to support his family. In turn, he taught his family to pick out the best cut of meat for dinner and how best to prepare it. He loved to cook and show his children the joy of it as well. He was a member of The Church of Latter–day Saints, serving in various positions including a Ward Missionary and an Ordinance Worker in the Ogden Temple. He was also the Governor of the Moose Lodge in San Jose. John is survived by his loving wife Loretta, children Francine (Ron) Stauffer, John (Vicki) Field, Renee (Ken) Powell, Randy Field, Robert Field, Stacey (Jeff) Civian, and his sister Patricia (John) Lopez, as well as many grandchildren, great-grandchildren, cousins, nieces, nephews and wonderful friends . He is preceded in death by his parents Russell and Louise, brothers Russell, Adolph, Franklin, and George, sister Elizabeth, daughter Justine, son Brian, and grandson Wesley. A remembrance of his life will be scheduled at a later time when we can all be together to share our wonderful memories of this loved man.

John David Field, 83, passed away May 19, 2019. He was born in East Hampton, New York on March 22, 1936 to Russell and Louise Field. He was raised and graduated from high school on Long Island. John married Loretta Schow on April 8, 1967... View Obituary & Service Information

The family of John David Field created this Life Tributes page to make it easy to share your memories.