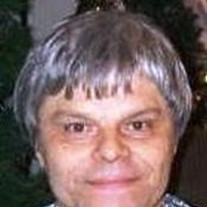 John “Carl” Fritch, 62, returned home to his loving Heavenly Father on May 18, 2013 surrounded by loved ones. He fought a long, courageous battle with cancer. Carl was born in Park City, UT on January 16, 1951 to John Clyde and Edith Beth Winters Fritch. He was the oldest of five boys; his brothers were his best friends and he remained close to them throughout his life. Carl grew up in Park City, UT, Rock Springs, WY, and Anchorage, AK, where he graduated from West Anchorage High School in 1969. Carl served a mission in Pennsylvania for The Church of Jesus Christ of Latter-day Saints from 1970–1972. When his father passed away in 1973, the family moved to Orem, UT. Carl lovingly cared for his mother until she passed away in 1988. At that time he purchased the family home and remained there until shortly before his death. Carl earned an Associate’s Degree from Utah Technical College in Graphic Arts. He later continued his education at UVU studying Computer Science. He worked as a software engineer at several locations, most recently at Digital Technologies in Springville. He enjoyed his job there and was very close to the people he worked with. After years of bachelorhood, he met and married Kristie Faye Allen on May 1, 1999. gaining two beautiful daughters in the process. Later he was blessed with four grandchildren and each one was his “favorite.” Carl loved music and taught himself to play the guitar at age 17. He played in several bands, most notably Peace and Quiet. He was not only a talented guitarist but also an amazing vocalist. Peace and Quiet entertained thousands of happy fans over the last 40 years. He dedicated his free time to music and promoting the local music scene. He was passionate about helping young musicians find success. He also loved the outdoors and was always up for a road trip of any kind. His favorite place to share with his family was Yellowstone National Park. Carl is survived by his loving wife Kristie Allen Fritch, his children Brandi (John) Barnard (Pleasant Grove), Chantia Ray (Provo), and Sean Ivy (Orem), whom he thought of as a son. He is also survived by his grandchildren Drew, LilyJane, Jack, and Lucy Barnard and his four brothers: Clyde Fritch (Salt Lake City), Michael (Gloria) Fritch (Orem), Daniel (Cathy) Fritch (Lehi), Robert (Karen) Fritch (Pleasant View), and many other relatives. Funeral services will be held Friday, May 24 at 10:00 AM at the Orem 2nd Ward building, 80 South 280 East in Orem, UT. Family and friends may visit from 9:00 - 9:45 am prior to the service at the same location. Interment in the Orem City Cemetery. To all of the doctors, nurses, and especially to the Utah Hospice Specialists team who took wonderful care of Carl: thank you, thank you, thank you.

The family of John "Carl" Fritch created this Life Tributes page to make it easy to share your memories.