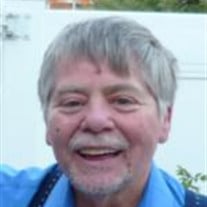 John Norman Gagnier, Jr. (“Papa”) passed away at his home in Taylorsville, Utah on January 3rd, 2011. Born on December 3rd, 1948 in Providence, Rhode Island to John Norman, Sr. and Mildred Marie, John was the 3rd of seven children. At the age of five, he moved with his family to Oakdale (?), Conneticut, where he later attended Montville High and was a member of the second graduating class of the school in 1966. In 1976, John was baptized a member of the Church of Jesus Christ of Latter-day Saints and moved to Utah shortly thereafter. He married Diane Gagnier in the Jordan River Temple on November 1st, 1986. John was a faithful member of the Church and served diligently in a variety of callings, including Stake Executive Secretary, High Councilman, and, his personal favorite, Gospel Principles teacher. He was a great missionary of the gospel of Jesus Christ and loved to share his testimony. John was self-employed for much of his adult life, but he was also a teacher for over a decade. He worked as an elementary teacher at a Challenger school and, after that, was the favorite substitute teacher to many classrooms around Granite School District. His students loved him and many were inspired by “Mr. G.” John loved being with children, especially when it was his own grandchildren. “Papa” could often be found on the floor laughing with his grandchildren or playing his accordion for them. He was an accomplished accordion player and enjoyed playing for any audience. Above all, John was a kind and gentle son, husband, father, and grandfather who loved people. Wherever he went, he talked to people and made fast friends. He had a great sense of humor and always made everyone laugh. John was also a hard worker and set a great example for others. He enjoyed serving people, especially the elderly, and always looked for ways to help them. John was a shining example to all who knew him. He will be infinitely missed and we can’t wait to see him again. John was preceded in death by his parents, his second wife, Jensine Peterson, and two of his sons, Kimball and Joshua. He is survived by his wife Diane and children, Tina, Garth, Daniel, Dana, Josh and 11 grandchildren. Services will be held 12 Noon, Saturday, January 8th, 2011 at the Salt Lake Jordan Stake Center, 4700 South 3676 West, Taylorsville, UT with a viewing prior to services from 10:30am to 11:45am and Friday at the church from 6 to 8 pm. Interment at Elysian Burial Gardens.

The family of John Norman Gagnier Jr. created this Life Tributes page to make it easy to share your memories.