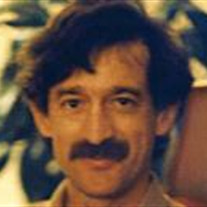 On the beautiful morning of October 21, 2010, John passed on to his next existence. A man of strong will and determination, he chose to take the next step in his journey. He went with God and may he be in peace. May his reunion with love ones be sweet. Born to Greek immigrant parents Nick and Catherine Kulkus on February 27, 1951 in Midvale, UT. He grew up in a loving home and was proud of his Greek heritage. He came of age in the innocence and turbulence of the 50's and 60's. He was an Army vet of the Vietnam War. Graduate of Hillcrest High School and had an A.D. from the University of Maryland. He married Patti Godwin on November 5, 1977 at Prophet Elias Greek Orthodox Church. The marriage ended after 28 years but the friendship continued. John was the proud father of Robert and Thomas who blessed his life immeasurably. He wanted them to know of his love. John worked as a journeyman carpenter, always enjoying the hard work of building and creating. He loved the great outdoors and enjoyed fishing, hunting, trap and skeet shooting. John was strong, independent, generous, and had a wicked sense of humor that we will all miss. He was preceded in death by his parents. Surviving John are his sons Robert Kulkus and Thomas Kulkus, his former spouse Patti Kulkus, sister Vicki Kulkus (Bob Collins), brother Ernest Kulkus (Sandy), and former sister-in-law Kathy Hagen. He is also survived by his niece Danielle Lingwall, a.k.a. Pinky, nephews Rick Shane, Nico Koulurus, and Rich Hagen. The family would like to express appreciation to the many caregivers who were a part of his life for the past few years. We thank you for your compassion and care. Thanks also to the friends and neighbors who helped him along his way. John lived a simple life and wanted a simple transition. Cremation services entrusted to Premier Funeral Services. He wanted family and friends to get together to remember the good times. All friends and family are invited to celebrate his life on Saturday November 6, 2010 from 5:00 - 7:00 at the Kulkus residence: 10876 Shady Dell Drive in Sandy.

On the beautiful morning of October 21, 2010, John passed on to his next existence. A man of strong will and determination, he chose to take the next step in his journey. He went with God and may he be in peace. May his reunion with love ones... View Obituary & Service Information

The family of John Nick Kulkus created this Life Tributes page to make it easy to share your memories.