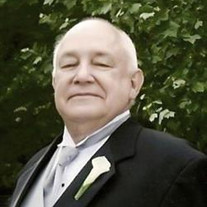 John Paul Larsen, 72, loving husband, father, grandfather, brother, dedicated teacher and friend, of Orem, passed away on January 28, 2015 at his home surrounded by his loving family. John was born in Provo, Utah to Paul and Dorothy Larsen on August 20, 1942. He went to school in Salt Lake City at Highland High School, class of 1961. He married his sweetheart, Sally Huntington on July 15, 1966 in the Salt Lake Temple. They were married for 48 years. John graduated from Brigham Young University with a degree in Chemistry and Physics. He owned his own business, Orion Chemical for 22 years. He also worked for Alpine and Granite School District teaching Chemistry and Astronomy. He served in the Army for 8 years. He was involved with many activities in the LDS Church. He served an honorable mission to the Dublin, Ireland Mission under Pres. Stephen Covey during 1963-1965. St. Patrick’s Day will never be the same without him singing The Mountains of Mourne and Danny Boy. Whenever we see a beautiful rose, we will think of Dad as he enjoyed picking and pruning them and he appreciated so many beautiful things in life. He taught us all to appreciate classical music, reading all kinds of literature and exploring the night skies with his telescope. He was an endearing “Poppy” to his 14 grandchildren and will always be remembered for his amazing treasures he shared so willingly with them. He loved each one of them, and they knew it! He will be sorely missed by all of us for his quick wit and silly smiles in every picture. John is preceded in death by Paul and Dorothy Larsen, his mother and father, and Robert Lewis Larsen, brother. John is survived by his wife Sally Lynne Huntington; his brother, Parley Craig Larsen; his children, Michael John (Tina) of Bern, Switzerland, Alisa Anne (David) of San Antonio, Texas, Christian Paul (Paris) of Highland, Utah, Aaron Kenneth (Jana) of Roswell, Georgia and Erik-Dean (Reece) of Taylorsville, Utah. His 14 grandchildren are Mia, Bastian and Lorenz Larsen; Jameson David, Taylor Paul, Kelsey Madeline, Sydney Anne, Ryan Albert and Rhonan Emil Funk; Christian Coleman, Chloe Patricia and Estella Loren Larsen; Jonah Aaron and Malia Makenzie Larsen. Pallbearers will be Parley Craig Larsen, Michael John Larsen, David Richard Funk, Christian Paul Larsen, Aaron Kenneth Larsen, Erik-Dean Larsen, Jameson David Funk, Taylor Paul Funk, Christian Coleman Larsen and Jonah Aaron Larsen. Honorary Pallbearers will be Ryan Albert Funk, Rhonan Emil Funk, Bastian Larsen and Lorenz Larsen. Memorials may be given to the Church of Jesus Christ of Latter-day Saints General Missionary Fund. The Larsen family wishes to extend our sincere thanks to IHC Hospice team including Dr. Gary Garner and Dr. Brandon Barney, Dr. Robert Taylor, Betsy, Debbie, Denise, Amy and Christy who were our phenomenal nurses. We would also like to thank Bishop Roland Nelson, Bro. Craig Flinders and Bro. Bryan Brinton for their kind service and extension of love to our family. Funeral services will be held at 11:00 am, Tuesday, February 3, 2015 at the Sharon 6th Ward Building, 545 South 800 East, Orem, UT with a viewing prior to services from 10:00 am to 10:45 am. Burial will follow at East Lawn Cemetery in Provo, UT.

The family of John Paul Larsen created this Life Tributes page to make it easy to share your memories.