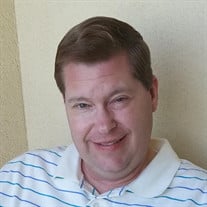 John Garrett Luter was born on March 27, 1968 in Panorama City, California to James Gray and Anna Ruth (Edling) Luter. He is the oldest of two children. He grew up in Granada Hills, California where his kindness and sweet spirit brought him numerous friends. He attended schools in the Los Angeles system, graduating from Kennedy High School. His primary interests were acting, photography and science fiction. After attending Ricks College (now BYU-Idaho), he served a mission for the Church of Jesus Christ of Latter Day Saints in the Christchurch, New Zealand Mission between 1987 and 1989. Upon returning, he attended Los Angeles City College and California State University at Northridge, obtaining a bachelor’s degree in Television Production. He worked for IBM’s CAD division before it closed, interned at several TV production companies, and worked at the LA Dodger’s Stadium and the New Orleans Hotel Arena before following his parents to West Jordan, Utah. There, he became a teacher’s assistant, and began working on a master’s degree in Elementary Education. He met Keri (Salazar) Batterman and her two sons, Kaden (5) and Jake (9) at church. From the beginning, the boys began to bond with John. It made the marriage quite easy to plan for all concerned. John and Keri were sealed for time and eternity in the Jordan River Temple on August 18, 2007. John’s interest in science fiction put him into a writing mode and recently, he has been working on a novel. His dad will complete it for him. John was called home on April 14, 2016, leaving behind Keri, Kaden and Jake, his parents, his sister, Mary Ellen Watterson (Michael), along with a host of people who have been affected by his loving and kind spirit. Though he could not communicate, several staff members of the U of U hospital told Keri that they had been touched by his spirit. Surely, he was loved by many and will be missed by all. Funeral arrangements are as follows, all at the Founders Park Stake Center, 11695 Kestrel Rise Road, South Jordan, Utah: Viewing will be between 6:00 and 8:00 pm, Thursday, April 21 and from 10:00 to 10:45 am, Friday, April 22. Services will begin at 11:00, with internment to follow.

John Garrett Luter was born on March 27, 1968 in Panorama City, California to James Gray and Anna Ruth (Edling) Luter. He is the oldest of two children. He grew up in Granada Hills, California where his kindness and sweet spirit brought him... View Obituary & Service Information

The family of John Garett Luter created this Life Tributes page to make it easy to share your memories.