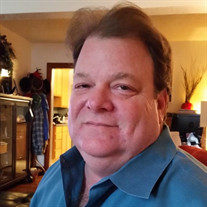 On November 14, 2019, John Harvey Makoff passed away suddenly at home. John was born in Salt Lake City, Utah on December 27, 1955 to Richard and Colleen Makoff. With his brothers David and Rocky, John grew up in Salt Lake and graduated from East High School. His parents later divorced and his father remarried. Through that marriage, John gained a step-mother, Sydney Makoff, and an adopted brother, Sydney’s son John. As a member of the family that founded the Makoff department store, John learned the family business and developed an entrepreneurial spirit that would serve him through his life. Building on that experience he attended Westminster College. After college John moved to New York where he worked for several years in the fashion industry for a leading designer. John loved everything about New York, the arts, architecture, the constant energy, and most importantly, the food. He was known to have cheesecake and pastrami delivered to Utah from the famous Carnegie Deli. Eventually, John returned to Utah and met the woman who would steal his heart. They met in 1985 and married in October 1986, enjoying 33 wonderful years of marriage. His marriage also came with instant fatherhood to Tonya’s two children, Angela and David, a role he happily undertook, gladly accepted, and never shied from. In 1990, John’s family grew when they were blessed with the birth of a handsome baby boy, Samuel. No father doted on his son more than John did on Sam. John loved to travel. Some of his most treasured memories were traveling with his sweetheart, Tonya, when they visited New York, New Orleans, San Francisco, and Hawaii. A favorite pastime was baseball, whether watching Sam play from little league to high school or traveling to watch games at several major league stadiums. He also loved music and passed many hours every week playing guitar in a band. Later on, after being blessed with grandchildren, he loved to spend time in his little music room teaching little children who could barely walk to make music (noise) with his many instruments. Ten years ago, John was diagnosed with congestive heart failure, one of several major medical issues John faced over the years. Each issue came with its own difficulties, pains, and trials, but John met each with strong, stoic patience and resilience, fight back and giving himself and his family, many years doctors said he wouldn’t live to see. John was preceded in death by his father, mother, and brother David. He is survived by his loving wife, Tonya, his step-daughter Angela (Doug), step-son David (Kim), his son Sam (fiancé Chantal), step-mother Sydney, brothers Rocky and John, and seven grandchildren. His love, laugh, and smile will be missed. A celebration of John’s life will be held on December 27, 2019 from 11-2 pm. If you wish to attend, please contact Tonya at 801-633-7331 for location information.

On November 14, 2019, John Harvey Makoff passed away suddenly at home. John was born in Salt Lake City, Utah on December 27, 1955 to Richard and Colleen Makoff. With his brothers David and Rocky, John grew up in Salt Lake and graduated from... View Obituary & Service Information

The family of John Harvey Makoff created this Life Tributes page to make it easy to share your memories.