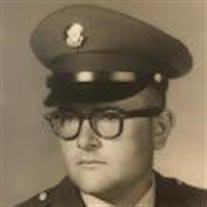 John Daly Morton 1937 - 2019 John Daly Morton was born in Torrance, California, on the 5th of November 1937, to George Lynn Morton and Mary Jeannette Fulton. He attended Santa Ana Senior High School and graduated in 1956. He proudly served his country in the U S Army Infantry, from 1958 to 1964. He was a veteran of the Korean Conflict. John met Valery Marie Peters, from St Paul Minnesota, and they were wed on Thanksgiving Day, November 28, 1963, in Orange California. They celebrated 55 years together for which the family is very thankful. To their union came two children, Vincent Lynn Morton, and Julia Marie Morton (Burrows). John pursued a career in the grocery business, where he served as Produce Manager for many years. John loved touring on his various motorcycles around California and even in Europe. He also loved classic sports cars of which he owned several. John and Valery resided most of their lives in Corona del Mar and Laguna Niguel California. They came to Utah in 2017 for enhanced care. John was a kind and loving caregiver for his wife Valery, who bravely battled COPD for several years. Valery passed away peacefully on the morning of November 28, 2017, in Orem, Utah. Learning patience through his struggles with Parkinson’s disease and Diabetes, John passed away peacefully, on the evening of Wednesday, February 7, 2019, in Orem, Utah. John was preceded in death by his wife Valery Morton, and by his sister Barbara Kay Heavirland. He is survived by son Vincent Morton, Vineyard, Utah, daughter Julia (Heather) Burrows, Santa Barbara, California, and sister-in-law Irene Rodon, Orem, Utah. Those who knew and loved John, will miss this gentle, soft spoken man. His kind smile and dry sense of humor was with him until the end. Memorial Services for close friends and family will be held at 10:00 am on Saturday, March 16th at: Summerfield Retirement Home 911 North 800 West Orem, UT 84057 Graveside Military Honor Ceremony will be held at 12:00 noon on Saturday, March 16 at: The Provo City Cemetery 610 South State Street Provo, UT 84603 Condolences and well wishes can be sent directly to: Vincent Morton c/o John & Bonnie Wallace 568 South 1920 West Orem, UT 84059

The family of John Daly Morton created this Life Tributes page to make it easy to share your memories.