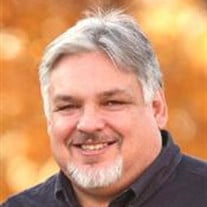 Dale Kent Johnson, beloved Husband, Father, Brother and Friend, passed away peacefully on December 10, 2011, surrounded by his family, after a courageous battle with lymphoma. Dale was born April 23, 1951, in Provo, Utah, to Elwood J and Beth Allred Johnson. He was the fourth of five children. Dale, known among friends as “Bird,” graduated from Orem High School in 1969, where he was an All State Heavy Weight Wrestling Champion and an All State Tackle, earning a full athletic scholarship to BYU. In 1975, Dale married Marsha Perry, his high school sweetheart, in the Provo LDS Temple and they became parents of four children: Erin, Melanie, James and Daniel. Dale graduated from BYU in Recreation Therapy, and achieved a Master’s Degree in Recreation Administration. He worked as a Recreation and a Block Officer at the Utah State Prison, retiring as a Probation and Parole Officer for the State Dept of Corrections, then returning to the Prison as a Case Manager for several more years. Dale was ordained a High Priest in the Church of Jesus Christ of Latter-day Saints and loves his Savior, Jesus Christ. Dale had a big heart and treasured his family above all else. He was an adoring “Papa” to his five grandchildren. Dale is survived by his wife, Marsha; four children, Erin (Ethan) Jolley, Melanie Johnson, James (Shanelle) Johnson, Daniel (Jenessa) Johnson; five grandchildren, Emily, Greta, Jase, Anson, Madden; two sisters, Janet (Larry) Jackson, Dorothy Johnson; Sister-in-Law, Connie Johnson; nieces, nephews, and Mother-in-Law, Melba Perry. He was preceded in death by his parents and two brothers; Gerald A. Johnson, and Richard E. Johnson, Father-in Law, Leo Perry. Funeral Services will be held Wednesday, December 14th, 11:00 a.m., at the LDS Church on 900 West and 2150 North in Provo, with a viewing from 9-10:30 a.m., prior to services. There will also be a viewing on Tuesday evening from 6-8:00 p.m. at the church. Interment at East Lawn Memorial Hills Cemetery. The family wishes to express heartfelt gratitude to the doctors and medical staff at LDS Hospital, East 8, for their compassionate care for more than a year and to the Leukemia and Lymphoma Society for their assistance.

Dale Kent Johnson, beloved Husband, Father, Brother and Friend, passed away peacefully on December 10, 2011, surrounded by his family, after a courageous battle with lymphoma. Dale was born April 23, 1951, in Provo, Utah, to Elwood J and... View Obituary & Service Information

The family of Johnson Kent Dale created this Life Tributes page to make it easy to share your memories.