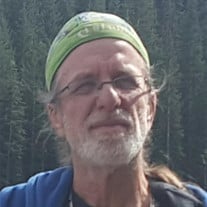 Jon James Yeager- A kind and loving man passed away on March 22, 2016 suddenly from pneumonia. It was a vast shock to everyone who knew him. He was born November 10, 1959 in Buffalo, New York and moved during his childhood and teen years to California, Alaska, and Nevada before finally settling down in Utah in 1998. He experienced relationships through all of this with various kinds of people. This contributed to him being a real people person who got along with everyone he met. Jon was a wonderful person who demonstrated generosity, happiness and joy everywhere he went. Loving the Holidays he celebrated by decorating lavishly and wearing Santa hats and festive clothing everywhere possible. He was also a very loyal Buffalo Bills fan and could always be found in some kind of apparel in support of them. Jon was very compassionate and showed this to all animals. Especially to his two Pit Bulls, 2 cats, and 3 birds. At work he signed all correspondence with Bless the Beasts and the Children. Jon loved doing yard work especially along side his wife. Most years he kept the lawn immaculately trimmed and edged with flowers planted in all the borders. He also loved gardening and had some prize-winning gardens. He was a wonderful Father to his two step children Anthony and Davina. He was always there with a listening ear or to attend their programs and parent-teacher conferences. They considered him a bright, beautiful and humble soul. He was also a wonderful husband who took care of his wife’s every need including her recent difficult back surgery and stayed by her side every minute through surgery, a seven day coma and six weeks of healing and rehab in the hospital. He took care of most of her needs there that nurses would normally do. He was a wonderful Papa to Salem, Shayne and Izabella making numerous treasured memories. He loved to play with play-dough among other things and looked forward annually to celebrate their birthdays. Jon worked the last 14 years at Convergys hoping to advance in the company. He treated his employees well, giving them the encouragement to take pride in what they did and making all problems seem small and simple to solve. He also put in many years in at Granger Francesco’s before their closure. Jon is survived by his wife of 18 years Darlene, his two step children Anthony (Nikki) and Davina, his Mother Sandra Lockard, sister Sue Park, brother Davis Yeager, Birth Children Lisa, James and Christopher and numerous grandchildren. He is preceded in death by his Father Jon Davis Yeager and one daughter. Because of so many difficulties surrounding Jon’s death we are only now able to celebrate his life. Jon didn’t want a service but loved to barbeque. So we are having a Pot-luck barbeque on Saturday August 6th at 11:30 am at Millrace Park 1150 West 5400 South for all family, friends and work associates who felt close to Jon. Please come ready to share memories of Jon and bring your favorite barbeque dish.

Jon James Yeager- A kind and loving man passed away on March 22, 2016 suddenly from pneumonia. It was a vast shock to everyone who knew him. He was born November 10, 1959 in Buffalo, New York and moved during his childhood and teen years to... View Obituary & Service Information

The family of Jon James Yeager created this Life Tributes page to make it easy to share your memories.

Jon James Yeager- A kind and loving man passed away on March...