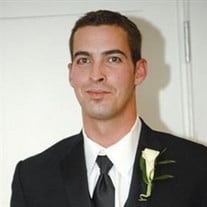 Jonathan Isaac Clements was born on February 26, 1981 in Slidell, Louisiana. He passed away on January 21, 2018 in Pocatello, Idaho after a brief illness. Jon was a son, a brother, an uncle, a nephew, and a friend to anyone who needed one. Jon grew up loving sports and building things. Jon always learned quickly with little effort and could easily conceptualize ideas. He was endlessly curious and was always determined to figure out how things worked, how to build things, and how to fix things. He learned how to sail boats as a teenager, and always enjoyed spending time in and on the water. Jon loved dogs and the most special bond he ever enjoyed was with his dog, Cousin. Jon was a gentle man who understood pain and suffering. His understanding of the two undoubtedly played a part in forming his personal code of ethics and heightened his empathy for the pain of others. Jon was devoted to lessening the pain of anyone around him, including himself as he tried vigorously and bravely to build the clean and sober life he craved so badly. His strength and talents made him a natural leader. His sly sense of humor, warmth and quick wit made him likeable, fun and a friend to all. Jon was a good man, trusted and loved by his family and friends. Jonathan is preceded in death by his grandparents, Fred and Poinsettia Clements, and Glenn and Beverly Lane, and his step-father William Rand Jarvis. Jonathan is survived by his parents William M. and Janell Clements and Christine M. Jarvis; his brothers and sisters, William M. Clements Jr. (Christy), Aimee Clements Hadfield (Jeff), Suzanne Clements, Joseph Clements, Wendy Clements Wright (Chris), James Clements, Douglas Beattie (Irina), Teri Bolton (John), Scott Rice (Sophie), Garrett Rice (Karl), and Cody Rice; and by many nieces and nephews whom he loved very much. Jonathan will be remembered as dependable, loving, and selfless. Jon’s life will be celebrated by his family in a private memorial service. In lieu of flowers, the family encourages donations to https://www.gofundme.com/jon-clements-memorial-scholarship a scholarship fund which will help others achieve Jon’s goal of obtaining a college degree.

Jonathan Isaac Clements was born on February 26, 1981 in Slidell, Louisiana. He passed away on January 21, 2018 in Pocatello, Idaho after a brief illness. Jon was a son, a brother, an uncle, a nephew, and a friend to anyone who needed one. Jon... View Obituary & Service Information

The family of Jonathan Isaac Clements created this Life Tributes page to make it easy to share your memories.