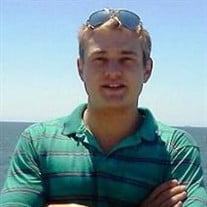 Jonathan Ray Stevens died unexpectedly Wednesday March 8th, 2017 while working in New Mexico. He was born August 4, 1985 in Renton Washington the third son of four children. At age 4 he moved with his family to Utah. Jonathan enjoyed growing up in a neighborhood of north Orem Utah. He loved playing soccer, basketball and hanging with friends. He had a passion for music and loved playing his guitars. After graduation he attended Utah Valley University for a brief time and then began doing refractory work. He became a certified industrial mason eventually managing operations at a refractory in Billings, Montana. During the off season, he did contract work at various refineries in the western United States. He was working for Guy Nielson Company at the time of his death. He loved the men he worked with and considered them brothers. Known by many as “Jonny”, growing up he demonstrated exceeding amounts of kindness and loyalty, qualities he carried into adulthood. He was very big-hearted and was generous with his time, skills, and resources to help any in need. He loved the outdoors where he had many adventures skiing, hiking and hunting deer and elk with his father, brothers, and friends. He loved his two children deeply and cherished spending time with them. Most of all he enjoyed taking his kids to the nearby mountains to go fishing, hiking, camping and helping them enjoy every good experience the outdoors has to offer. He loved the beauty of the earth and the wonders that could be found exploring it. He enjoyed campfire cooking, and his BBQ was legendary to say the least. We will miss his sparkling blue eyes, big smile, sense of humor and infectious laugh. Jon is survived by his wife Porsche Anderson Stevens and son River Jackson Stevens of Kamas,Utah; daughter Alexsis Rae Stevens of Spokane, Washington; parents Mark and Lori Stevens of Lindon, Utah; brothers Jared (Melena) Stevens, Orem Utah; Mark (Kendall) Stevens, Pleasant Grove, Utah; sister Elisabeth (Russell) Whitchurch, Pleasant Grove, Utah; 5 nephews, and many beloved aunts, uncles, and cousins. He was preceded in death by his grandparents, Arvel and LaRue Stevens, Raymond LaBeau and Irene Hessler, and an uncle, Donald Ray LaBeau. We would like to invite friends and family to join us for a memorial celebration of his life Thursday, March 23, 2017 at the LDS chapel located at 325 North Canal Drive (600 East) in Lindon, UT. Guests may visit with family from 1:15 to 1:45 in the Relief Society room. Services will follow at 2pm in the chapel. Interment will be in the Lindon City Cemetery. The family would like to express sincere appreciation to Jon’s co-workers at Guy Nielson Company, colleagues at other companies where he has worked, and his close friends for their help during this difficult time.

The family of Jonathan Ray Stevens created this Life Tributes page to make it easy to share your memories.