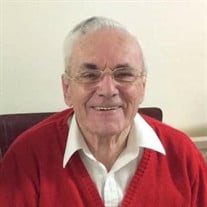 Jose Rafael Vera Pereira, 86, beloved husband, father, grandfather and friend, died peacefully on the morning of March 6, 2020 surrounded by family. He was born on March 24, 1933 in Hualqui, Concepción, Chile to Rafael Lorenzo Vera Perez and Clara Lidia Pereira Iglesias. He was the 4th child of 10 children: Sergio, Clara, Nelly, Jaime, Jorge, Adriana, Elsa, Patricio and Dario. Rafael married Sylvia Raquel Cancino Nunez on November 7, 1959. She had 4 children: Julio, Eduardo, Sylvia and Hernan. He treated them as if they were his own children. They then had 2 daughters: Mitzi and Lorena. In September of 1973, Sylvia & Rafael were sealed in the Salt Lake LDS Temple. Rafael loved adventures, sailboats, swimming with the grandkids, knitting Christmas stockings, he owned his own restaurant, and he was a great story-teller. We will never forget “La Tenquita” Story. He was an active member of the Church of Jesus Christ of Latter-day Saints where he served in many capacities. He was the second counselor of the only mission in Chile for 7 years, between 1966-1972. He served under President Carl J. Beecroft, Robert H. Burton, J. Donal Earl and Royden J. Glade. Rafael brought his family to the United States in March of 1973 where he worked for Brigham Young University. He was a maintenance supervisor in the Smith Field House for 28 years. After which, he retired to take care of his wife until she passed away in 2004. Rafael was preceded in death by his parents, wife, 7 siblings and 1 son, Eduardo. Survivors are 2 sisters: Elsa, (SLC), Nelly, (Chile) & 1 brother, Dario (Canada). Children: Julio (SLC), Sylvia (Provo), Hernan (Missouri), Mitzi (Orem), Lorena (SLC). 22 grandchildren, 40 great-grandchildren and 8 great-great-grandchildren. Graveside services will be held at 11:00 a.m. Saturday, March 14, 2020, at the Provo City Cemetery. Private family viewing was held. Interment will be held at the Provo City Cemetery.

The family of Jose Rafael Vera Pereira created this Life Tributes page to make it easy to share your memories.