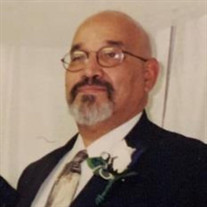 On Wednesday, November 18th, 2020 Joseph Michael Anzalone of American Fork, Utah passed away after a battle with pneumonia in his Assisted living facility. He will be missed by many who knew him. Born as Henry Otero on 4th November, 1948 to Mariano Montoya Otero and Mary Elizabeth Otero in Albuquerque, NM. He is survived by his daughter: Tina Marie Tilton;his step-children: Christopher Cummins, Brian & Nicole Cummins, Jeremiah Cummins, Sarah Cummins; and his grand-children: Alysse Cummins, Anjolie Cummins, Elijah Cummins, & Ashtyn Cummins; and his siblings: Frances Klinge, Dorothy Jones-Montgomery, Teresa Durm, Anna Weisheimer, Lorraine Hudnall, Maria Meuret, Connie Prewitt, John Otero, Paul Otero, Sally Garrett and Benny Otero. He was preceded in death by his Mother and Father, his wife: Pamela Sue Cummins; his step-children: Joseph, Rebecca, & Brandon Cummins, and his siblings: Catherine Otero, Freddy Otero, Robert Jones and Mary Mendoza. Known in his early years as “Hank”, he was always proud of his football accomplishments during his years at Boys Town in Omaha, NE where “Hank the Tank” won multiple State Championships. He was born as a member of the Church of Jesus Christ of Latter-Day Saints and continued within that community to find the Lord. Joseph lived a very difficult scarred and scattered life but found his calling with the heart of a Chef. He often offered to feed large crowds of people in his church and his Assisted Living Facility. He found calm when he married Pamela in 2001 and helped as a caretaker with her 2 autistic children. His happiest years were living in Hurricane Utah on a small farm with Pam where they raised goats, chickens, ducks, rabbits, several dogs, and a turkey. We are sure that he will continue to feed others in the next life as he is reunited with his loved ones. Love you more than rainbows! ♡ Graveside services will be held Saturday, November 28th, 11:00 am at the Hurricane City Cemetery, 225 E. 600 N. Hurricane, Utah.

On Wednesday, November 18th, 2020 Joseph Michael Anzalone of American Fork, Utah passed away after a battle with pneumonia in his Assisted living facility. He will be missed by many who knew him. Born as Henry Otero on 4th November, 1948 to... View Obituary & Service Information

The family of Joseph Anzalone created this Life Tributes page to make it easy to share your memories.