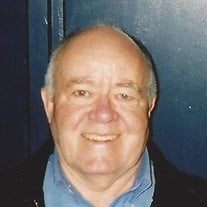 Joseph Raymond Bentley passed away on November 10, 2015 at the age of 79 after a long and fulfilling life which he termed to be the envy of most people. He repeatedly emphasized that he wouldn’t trade his life for any other and had done and accomplished many things that many people could only dream of. Joe was born to Ray Bentley and Emma Louise Overson on December 25, 1935, in Los Angeles, California. He was the youngest and only living son in his family and was preceded in death by his parents and siblings, Cleo Luray Brown, Priscilla June Bentley, Bonnie Bernice Tubbs, Melba Jeanette Winegar, Iris Julienne Martinez, and Charles Ray Bentley. From a young age, Joe demonstrated an inquisitive intellect and a love of learning. When he was 13 years old he built a bomb, which he took up to Ensign downs and detonated, blowing up part of the mountain. Authorities were astonished to learn a 13 year old boy could do such a thing. He loved to learn and studied a variety of subjects for over 13 years at the University of Utah. He loved mechanical engineering and loved to invent and build. He built a television at a young age that his nieces Sandy and Janna loved to watch due to all of the bulbs and components clearly visible. He invented a device that would rapidly cook hot dogs on forks. Joe served in the United States Army during the Korean War as part of the army radio corp. After returning home from his service in Germany he shared many adventures with his nieces, who loved listening to their uncle’s war stories. Joe would take them out into the Topaz Mountains in his blue jeep where they would gather up many gem stones with their mother Melba. After his time in the military, Joe worked for Edo Western doing oceanographic work repairing sonar equipment. He worked for Rocky Mountain arms and designed guns for them, one of which was used at the state prison. He worked for Bausch and Lomb and was the inventor or co-inventor on many patents which were key to restoring sight to the blind. Knowing that his work helped others in a special way gave him immense satisfaction. Throughout his life, Joe was always working on the next great project or invention. He was always busy and active in the pursuit of his hobbies. His favorite hobby was guns and gunsmithing. He built his own AK74 assault rifle and several other guns. Joe loved to travel and visited many countries and locations throughout the world and interacted with many people in many levels of society. Joe loved his travels and frequently told of his adventures from northern Alaska to Japan and to many other fascinating places. He told tales of narrowly escaping and avoiding death in one form or another and felt he had been preserved in life. Joe enjoyed helping other people and always had a smile on his face. He was a loving friend, father, and grandfather. He was wonderful, sometimes frustrating, and one of the smartest men we knew. Everyone in the family loved him and he will be missed. Joe is survived by his sons Shannon Bentley, Matthew Bentley, and his grandson Donnovan Bentley. There will be a graveside service and interment at Mount Olivet Cemetery, 1342 East 5th South, Salt Lake City, Utah 84102 on Saturday, November 21, 2015, at 11:00 a.m.

Joseph Raymond Bentley passed away on November 10, 2015 at the age of 79 after a long and fulfilling life which he termed to be the envy of most people. He repeatedly emphasized that he wouldn&#8217;t trade his life for any other and had done... View Obituary & Service Information

The family of Joseph Raymond Bentley created this Life Tributes page to make it easy to share your memories.