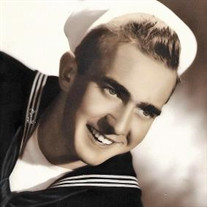 Joseph Robert Biesinger 1932~2017 Joseph Robert Biesinger passed away peacefully, surrounded by the love and comfort of his family, Sunday, October 8, 2017. Joe was born April 19, 1932 in Salt Lake City, Utah to loving parents Thomas Kenneth and Edna Naoma Biesinger. He was sealed to Joann Katherine Beckmann March 22, 1962 in the Salt Lake LDS Temple. Together they created a beautiful family and each one has been blessed by his generous heart and pure example of charity. Joseph possessed a great desire to serve the Lord through missionary work and encouraged all those he encountered to do the same. He served a full-time mission to the Southern states. He had the nickname "smilie" for he always had a pleasant disposition and encouraging smile to offer. He had the heart of a patriot and tremendous love of country. Joe served in the US Navy during the Korean War and earned a commendation for saving the life of a fellow soldier. He was a skilled general contractor and many of his creations can be found throughout the Salt Lake valley. Joe is survived by his children three sons and three daughters; Pamela (Mike) Barnett, Janna (Jim) Snell, Robert (Angie) Biesinger, Annette (Rory) McWhorter, Brent (Rachel) Biesinger, Ken (Amanda) Biesinger; 35 grandchildren; 27 great-grandchildren; two siblings Robin (Bonnie) Biesinger and Norma (Gerald) Gygi; numerous nieces and nephews. Preceded in death by his parents; siblings Kenneth "Sonny" Biesinger and Thomas Biesinger; grandchildren Kyle McWhorter and David Snell. Funeral Services will be held Friday, October 13, 2017 9AM at the Butterfield Canyon Ward House 6719 West Valynn Drive (off of 13400 South), Herriman, UT. Friends and family may call Thursday, October 12, 2017 from 6:30-8:30 PM and one hour before services begin, also at the Butterfield Canyon Ward House on Valynn Drive. Interment, Utah Veterans Cemetery & Memorial Park 17111 South Camp Williams Road, Bluffdale, UT.

The family of Joseph Robert Biesinger created this Life Tributes page to make it easy to share your memories.