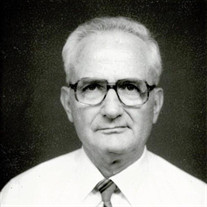 Joseph Junior Brubaker passed away peacefully in his sleep at 11:13 PM on May 3, 2022 in Millcreek, Utah at his daughter’s home. He was 104 years old. He had been looking forward to being reunited with his wife, Helen, who passed away 16 years ago. He was proceeded in death by Helen Sims McDonald (wife), Joyce McDonald Brubaker (daughter), Alice Margaret Frederickson (Mother), Joseph Arthur Mortensen (father), Charles Grover Brubaker (step-father), and Margaret Brubaker James (sister). He is survived by six living children: Nancy Sorensen (Myron – deceased, Daryl McMurrin); Mac (Teena), Scott (Rebecca), Calvin (Tani), Carol Cramer (Gary) and Alice Carlisle (Alan-deceased), his second wife, Dorothy Jensen and two siblings (Charles Brubaker and Gladys Tidwell). He had 30 grandchildren, 77 great-grandchildren and two great-great grandchildren. Joe was born on March 16, 1918 in El Paso, Texas. He rose above many hardships in his life. He became a breadwinner for his family in his teens. Caring for and serving his family and others was important to him. He graduated from South High School, University of Utah (BS in Civil Engineering), and Iowa State University (Masters in Civil Engineering). A major career achievement was founding and directing the Industrial Engineering department for Kennecott Copper Corporation in Grant County, New Mexico. As a member of the Church of Jesus Christ of Latter-day Saints, he served in many callings, including bishop, high councilman and scoutmaster. He and Helen served four fulltime missions in India, Spain, New Jersey, and San Francisco. The last three were Spanish speaking. Joe and Helen went on a BYU study abroad semester between each mission. He was a great scouter. As well as the traditional scouting actives, he made kayaks with his scouts and took the boys river running. He served as district chairman for the Boy Scouts of America and received the Silver Beaver Award. He was a Wood Badge Leadership instructor and was on staff at Philmont Boy Scout Ranch. He shared his love of the outdoors with his family, taking them camping, hiking, and river running. He was also very fitness minded. He was running and bicycling before those sports became popular. He rode his bicycle across the USA (coast to coast) in his eighties. Although he gave up road biking in his mid-nineties, he still used an indoor bicycle trainer into his hundreds! Joe was president of the New Mexico Square Dance Association. He was a member of Toastmasters and an interesting speaker. He taught Dale Carnegie Courses. He loved learning and often gave his children books that he found especially enlightening. Joseph had a great love of his Savior. He regularly read his scriptures and said his prayers. If you ever ate dinner at Mom and Dad’s you could expect to participate in a kneeling family prayer before partaking of the meal. Family Home Evening time was sacred in his home. A viewing will be held at the Valley View Stake Center (2245 East 3900 South, SLC) on Saturday, May 14, 2022 at 11:13 AM. A funeral service will follow at 12:13 AM. Joseph will be buried in the Salt lake CIty Cemetery.

Joseph Junior Brubaker passed away peacefully in his sleep at 11:13 PM on May 3, 2022 in Millcreek, Utah at his daughter&#8217;s home. He was 104 years old. He had been looking forward to being reunited with his wife, Helen, who passed away... View Obituary & Service Information

The family of Joseph Junior Brubaker created this Life Tributes page to make it easy to share your memories.

Joseph Junior Brubaker passed away peacefully in his sleep at...