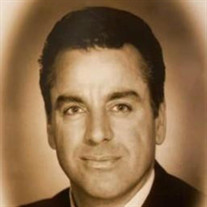 Joseph John Giacalone 1927 - 2021 In a world of hyperbole and exaggeration, it cannot be overstated how much of an actual mythic figure Joseph John Giacalone was to anyone who knew him. His stories of state championship wrestling, serving on the European front of World War II, deep sea fishing, snow skiing, bocce ball games, and pool volleyball are things of legend to those who heard them and passed them on. After 94 years of living the fullest life someone can, he passed on into legend himself on October 27, 2021. Joe was a first-generation American, born to Sicilian Immigrant parents in San Pedro, Calif. on April 12, 1927. One of five children, family was always the most important thing to him. And in the tight-knit Italian community where he grew up, he learned that family was any and everyone around you—that to show love and care for another made them your family. After high school, Joe was drafted into the U.S. Army and sent to Europe as World War IIended. He spent the majority of his service involved in the cleanup effort overseas—helping people rebuild their war-torn lives. His family expanded to those he served in Germany and elsewhere. Returning home, he met the love of his life in Ann Farnsworth. She had spotted him four years earlier and had decided on that date (telling her mother) that she had found the man she was going to marry. And as would prove to be her talent—she just knew how things would be. They were married on December 1, 1951 in Yuma, Ariz. Combining a traditional Italian, Roman-Catholic family with an English, Mormon family was a challenge they faced, but one that was overcome with an outpouring of love and care. They won over their doubters and detractors and became the cornerstone of their respective families—hosting gatherings and embracing everyone with the love people have always and will always need in their lives. Joe’s laughter and kindness touched everyone he knew. They became his family and they felt it. Joe was a brother, uncle, father, grandfather to everyone he met. Joe’s own family was his pride and joy from the moment he welcomed his first daughter into the world until the moment he passed. Joe and Ann had six children and made every decision in their life around what they felt was best for their children, then grandchildren, then great-grandchildren. Up to the end of his life, Joe’s favorite place to be was among his family. Once a father, Joe left the family fishing business to be closer to home and his family. He joined Rohr Industries in 1952 and turned a temporary job into an entire career, retiring as Chief of Tool Design, Manufacturing Engineers in 1983. He nurtured countless careers and mentored everyone around him. Outside of work and well past retirement, Joe was always working with his hands. If it wasn’t working in his yard or on his house, it was working in your yard and on your house. He and Ann spent their lives looking out for the lost, the broken, and the ones in need. In any way that they could, they helped. Often decades after the fact, people would seek them out to let them know the lifelong impact their small actions made. From California to Utah to the world over, Joe made the people he came in contact with feel loved—to feel like his family. And in a world like ours, there is nothing more mythic than a man who makes everyone feel loved. Joe is preceded in death by his wife Ann and his son Joseph. He is survived by children Valarie Giacalone, JoAnn (Bruce) Sevy, Sharon (Mike) Denning, Heather Giacalone, Cara (Allen) Puckett, and Matt (Kari) Giacalone, grandchildren Michael Denning, Phillip Sevy, Adam (Jocelyn) Sevy, Cameron (Rachel) Denning, Christopher Giacalone, Anthony Puckett, Thomas (Dana) Sevy, Natalie (Randy) Stumph, Hunter (Erin) Denning, Amanda Gerrard, Tanner (Hayley) Denning, Joseph Giacalone, Rachel (Shane) Graff, Hannah Giacalone, Brian Puckett, Nicholas (Emily) Giacalone, Noah (Brooke) Giacalone, Vincent Giacalone, Elise (Isaac) Faldmo, Jacob Puckett, Ethan Giacalone, Maison Giacalone, Kate Giacalone. Funeral services will 12:00 Noon, November 6, 2021at The Church of Jesus Christ of Latter-day Saints chapel, 6250 East 1200 South, Heber City, UT where a viewing will be prior to services from 10:00 to 11:45 am. Interment and Military Honors will be 11:00 am, Monday, October 8, 2021 at the Utah Veterans Memorial Park, 17111 South Camp Williams Road, Bluffdale, UT.

Joseph John Giacalone 1927 - 2021 In a world of hyperbole and exaggeration, it cannot be overstated how much of an actual mythic figure Joseph John Giacalone was to anyone who knew him. His stories of state championship wrestling, serving on... View Obituary & Service Information

The family of Joseph John Giacalone created this Life Tributes page to make it easy to share your memories.

In a world of hyperbole and...