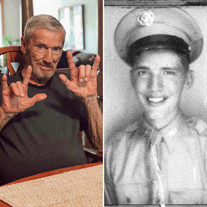 “Hey there sunshine, how are ya?” Joseph Spencer Packard, 90, passed away peacefully on October 29, 2021 surrounded by his family in the comfort of his own home in Holladay, Utah. Joe was born to Clarence Farrell Packard and Catherine Curtis Young on September 16, 1931 in Tacoma, Washington. He was the third child of thirteen with 6 brothers and 6 sisters. His family moved to the Salt Lake Valley early on, where he lived the majority of his life with his beloved wife Patricia Ann Packard, four sons, and daughter. Joe graduated from South High School in 1949. He served in the Air Force working on planes in Africa from 1950 - 1954. Joe had a very successful career as a salesman with NCH Corporation for over 40 years. He had a love for old cars, especially T-birds. He enjoyed landscaping and built a beautiful Japanese garden in his backyard. Whatever project he chose to do, it was never a simple project. They always required much thought and inspiration. He was known around the neighborhood for giving out cookies and treats to the kids and taught them manners of "Please" and "Thank You". Joe was the patriarch of the Packard family. Not only to his own, but to all his siblings, nieces, and nephews. He had a love for cooking and was known for his biscuits and gravy, and beer pancakes. He would provide food for family reunions at Pineview Reservoir and the Father’s Day breakfast at Storm Mountain. In the last years of his life, Joe will always be remembered for having a positive attitude and having a smile on his face. Joe is survived by his wife Patricia Ann Packard, his sons Trent Packard (Lori), Brett Packard, Casey Packard, Lisa Duran (Barry), and Raegan Packard (Karla). His grandchildren Megan Carroll, Taylor Packard, Lacie Duran, Landon Packard, Shelbi Metivier, Austin Duran, Nathan Packard, and Madison Packard. His Great grandchildren Hugh Duran, Reese Carroll, Nora Metivier, Archie Duran, and two more on the way, Aiden Carroll, and Easton Metivier. His siblings Janet Boehme, Betsy Baird, Tommy Packard, Billy Packard, Michael Packard, and Adrian Madsen. The family wishes to thank the hospice nurses at Summit Home Health & Hospice for their outstanding love and care for Joe. The graveside dedication will start at 1:00 pm on Wednesday, November 3, 2021 at Holladay Memorial Park. In lieu of flowers and gifts, the family requests donations to your local food bank.

&#8220;Hey there sunshine, how are ya?&#8221; Joseph Spencer Packard, 90, passed away peacefully on October 29, 2021 surrounded by his family in the comfort of his own home in Holladay, Utah. Joe was born to Clarence Farrell Packard and Catherine... View Obituary & Service Information

The family of Joseph Spencer Packard created this Life Tributes page to make it easy to share your memories.

“Hey there sunshine, how are ya?”