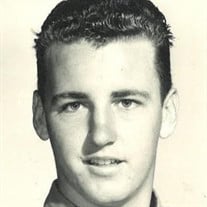 Joseph William Sanders, 76, passed away on April 29, 2021. Joseph was born August 4, 1944, to Absylum and Helen Sanders in Santa Monica, California, and is the older brother to Richard. He graduated from Santa Monica High School in 1962 and he went on to attend Santa Monica City College. He was a member of the Church of Jesus Christ of Latter-day Saints. His favorite callings included serving in a bishopric and serving with his wife at an assisted living center. He served an LDS mission to the Southern States mission. He met his beautiful bride and wife Linda Landes and they were later married in the Salt Lake City LDS Temple. Joseph served in the US Army during the Vietnam conflict as a dog trainer. Joseph loved sports and cheering on his Utah Jazz, BYU Cougars, and Los Angeles Dodgers. Joseph enjoyed spending time with his family and friends but also spent time watching various sports games live and on TV. He worked for the United States Postal Service. Joseph was known as someone who no matter what was going on to have a positive attitude and he always had a joke to tell. Joseph was preceded in death by his parents, Absylum and Helen, and his brother Richard. He is also preceded in death by his wife Linda and son David. He is survived by his daughter Suzanne, and his sons Mitch (Sam) and Mike (Jill), grandsons, Cooper, Oliver, Eric (Rocklyn), Tyler, and granddaughters Lucy, Vanessa, and Ellerena. A special thank you to the people at Intermountain Medical Center Heart Failure team for their loving care and support for the last thirty years and during his final days. In his honor, on Wednesday, May 5, 2021, a viewing will be held from 9:45 until 10:45 AM followed by the funeral at 11:00. Services will be held at the Cottonwood Creek Ward, Latter-day Saint building located at 1250 East 4800 South Salt Lake City, Utah. Joseph will be laid to rest at the Wasatch Lawn Memorial Park located at 3401 South Highland Drive, Salt Lake City, Utah.

Joseph William Sanders, 76, passed away on April 29, 2021. Joseph was born August 4, 1944, to Absylum and Helen Sanders in Santa Monica, California, and is the older brother to Richard. He graduated from Santa Monica High School in 1962 and... View Obituary & Service Information

The family of Joseph William Sanders created this Life Tributes page to make it easy to share your memories.