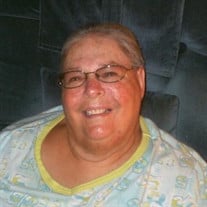 Joyce Brianne Harris January 14, 1944 – June 18, 2016 Joyce Brianne Johnson Harris, aged 72, passed away on June 18, 2016 in Provo, Utah. Joyce was born on January 14, 1944, in Chicago, Illinois, the daughter of Walter Perry and Susan Anastasia Bogut Johnson. In her youth, Joyce loved sports, figure skating, dancing, and playing with her dog Toby. When away from boarding school, she enjoyed spending time with her aunts Katie and Genevieve, and touring museums with her mom. In her adult years, she enjoyed learning about home improvement, such as canning, cooking, and crafts. For many years, Joyce raised her firstborn child, Debbie, as a single mom. She worked a variety of jobs to support her little family: envelope making, mother’s helper, and LPN. In 1977, Joyce married Grant Hyrum Harris, and became an immediate mother to Mary, David, and Charlene, whom she loved and raised as her own. Grant and Joyce’s union welcomed three additional children, Elizabeth, Joseph, and Susan. They lived and raised their children in Concord, California. Entrepreneurially-minded, Joyce had a desire to start her own transportation service. However, she knew her role as a homemaker was more important. Due to Grant’s health, she did odd jobs at home to help support the family, such as ironing and tending children. Joyce was a devout member of the Church of Jesus Christ of Latter-day Saints where she served as a primary teacher, visiting teacher, compassionate service leader, and other callings that she fulfilled with love. She also volunteered in soup kitchens and helped the less fortunate. Joyce was proceeded in death by her parents; husband, Grant; and son, Joseph. She is survived by her children Debbie, Elizabeth Bass (Mathew), Susan Mironenko (Yanis); stepchildren Mary Sanders (Steve), David (Elizabeth), Charlene; grandchildren, Julie Marlowe Barson (Blake), Joseph Harris, Evalina and Simon Bass, Svetlana Mironenko; step-grandchildren, Sierra and Stevie Sanders, Julia Clawson, Ian Smith; and great-grandchildren, Julian and Elijah Harris. Joyce was also looking forward to the upcoming birth of David and Elizabeth’s daughter, Q’orianka Harris. Memorial services will be held 11 a.m. on Tuesday, June 28 at the LDS chapel located at 888 South Freedom Blvd in Provo. Internment of Joyce’s remains will take place at a later time. In lieu of flowers, consider donating to Shriner’s Hospital, or a charity of choice. Mom, we love and miss you! We know you are in a better place where you can influence and serve those you love dearly without any limitations.

The family of Joyce Brianne Johnson Harris created this Life Tributes page to make it easy to share your memories.