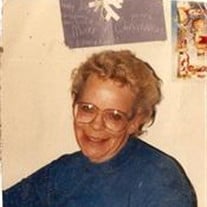 Joyce Virginia Francisco Hunt passed away on March 7, 2011 peacefully and surrounded by love. Born on July 11th, 1931, in Douglas, Wyoming, she was the daughter of Merl C. and Anne Hardgrave Francisco. Joyce was married to Mike German, later divorced. She married Delone Hunt and they divorced. Joyce graduated from Ogden High School in 1949 and served two years in the United States Army before returning to Utah and attending Stevens Henager College where she received her degree in the Secretarial Sciences. Joyce was a paraprofessional for the Tooele/Murray/Jordan Mental Health Clinic and the first director of the Tooele Crisis Center. She was also employed at Tooele Army Depot and Dugway Proving Ground. Joyce was interested in Native American artifacts, rock hounding and painting rocks, being with her children and grandchildren, camping, picnicking, gardening and spending time outdoors. She loved the many pets she had throughout the years, especially her dog, Puppy. Joyce was a big fan of fried chicken and ice cream. Joyce was preceded in death by both of her parents, and brother, Merl Francisco, Jr. Joyce is survived by her sister, Janet Voyles of San Antonio, Texas, as well as her children: Robyn Hedegaard, East Carbon, Utah; Teresa (Charlie) Jones, Tooele, Utah; Brent (Julie) Hunt, Stansbury, Utah; and Darrell Jay Hunt, Tooele, Utah; grandchildren Tod and Diane, Jenny and Joe, Mike and Crystal, Mandy and Rich, Dan, Alison, Corinne and Joe, Jason and Jamie, and Christopher. She was the very proud great-grandmother of 14. She will be missed by all those who knew and loved her. The family would like to express its sincere gratitude to Community Nursing Services of Price, Utah, notably Tisa, Joyce’s nurse there, as well as Community Nursing Services of Salt Lake for their kind and compassionate care of their Mother during her illness. The family would also like to thank the staff at St. Joseph Villa for their loving care of Joyce. Graveside services for the family will be held at Leavitt’s Aultorest Cemetery in Ogden, Utah. In lieu of flowers, the family requests that donations be made to an animal charity of your choice.

Joyce Virginia Francisco Hunt passed away on March 7, 2011 peacefully and surrounded by love. Born on July 11th, 1931, in Douglas, Wyoming, she was the daughter of Merl C. and Anne Hardgrave Francisco. Joyce was married to Mike German, later... View Obituary & Service Information

The family of Joyce Virginia Hunt created this Life Tributes page to make it easy to share your memories.