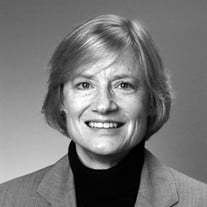 Joyce H. Young, Attorney and Community Leader, Dies at 62 Joyce H. Young, Vice President of Compliance for Goldman Sachs and a dynamic social leader in Greenwich, Connecticut, passed away at her home in Salt Lake City, Utah on October 9, 2017, after a brave battle with cancer. Ms. Young was born on March 31, 1955 in Kansas City, Missouri. Her father, Donald M. Young, was Human Resource Director for TWA. Her mother, the former Ruth H. Ferguson, was an artist and photographer. Mr. Young’s position with TWA relocated his family to Paris for four years where Ms. Young studied in French public schools from grades one through four. Upon returning to the United States, the family moved to Norwalk, Connecticut where Ms. Young graduated from Norwalk High School in 1973. Ms. Young received her B.S. in Journalism and B.A. in International Affairs from the University of Colorado in May 1977, and her J.D. from Fordham University in May 1983. An accomplished and respected attorney, Ms. Young worked for the law firms Brown & Wood in New York, NY; Dechert Price & Rhoads in New York, NY; and Finn Dixon & Herling in Stamford, CT. Ms. Young was the Assistant Town Attorney for the Town of Greenwich Law Department. She joined Goldman Sachs after relocating to Salt Lake City. Ms. Young’s professional achievements included admission to the New York, Connecticut and Utah State Bars; the US District Courts for the Connecticut District, Southern and Eastern Districts of New York; the US Court of Appeals for the Second District; and the United States Supreme Court. As a community leader, Ms. Young was generous with her time and expertise. Her notable positions included Parish Counsel and Vestry Member of Christ Church Greenwich; President of the League of Women Voters of Greenwich; President of the Friends of Greenwich Crew; and President of the Old Greenwich School PTA. Ms. Young is survived by her husband of 27 years, Thomas A. Hagan, and her two sons, Alexander D. Hagan and Samuel O. Hagan. She will live in their hearts forever. A Memorial Service will be held at Cathedral Church of St. Mark, Salt Lake City, UT, on November 11, 2017 at 3 pm. Donations in Ms. Young’s memory may be made to DaVinci Collaborative (www.davincibaltimore.org). The DaVinci Collaborative’s mission is to establish charter schools in Baltimore, MD. It was Ms. Young’s charity of choice from its inception. Her family wishes to continue the tradition.

The family of Joyce H Young created this Life Tributes page to make it easy to share your memories.