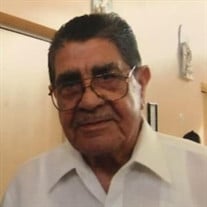 Pleasant Grove, UT – Juan Rubel Gutierrez, beloved husband, father, grandfather, and friend, passed away peacefully at home surrounded by family on Tuesday July 7th, 2021. He was born September 1st, 1925, in Lumberton, New Mexico to Jose Alpio Gutierrez and Benigna Garcia. He married Maria Dora Romero in (1946). Together they had six children, Barbara, Dorothy, Concilia, Susie, Ruby, and Paul. He left home at an early age of 16 where he served in World War II in the United States Army, reaching the rank of Sergeant, stationed in the Philippines. Discharged in 1945. Then meeting his wonderful wife Dora married for 75 years. After leaving the army he worked the railroad in Price, UT. Later moving to Orem where he was employed by Geneva Steel Production, retiring after 35 years. From there he found his dream job/hobby of sheep herding for several outfits. Each and everyone of us have very fond memories of this great man! He has surely left a legacy behind. His passion in life was harmonica and guitar, fishing, hunting, horses and watching westerns. He loved being in the solitary mountains on a horse. In later years after retirement and sheepherding he enjoyed going camping and being around family. Also gardening, growing his chili’s. Family wants to give thanks to the many care givers from Hospice. Without them he would not have been comfortably at peace at the end. Rubel is survived by his loving wife Maria Dora Gutierrez; their children; Dorothy Morse (George), Concilia Vaclavick, Ruby Kilpack (Kevin), Paul Gutierrez (Linda); 14 grandchildren; (19) great-grandchildren, (3) great-great-grandchildren. Proceeded in death by his parents, a sister, and a brother, two daughters and a son-in-law. The service will be held Wednesday, July 14th, 2021, at 10am, where family and friends can come and pay their last respects to Rubel, at Camp Williams State Military Reservation, 17800 S Redwood, Bluffdale, UT 84065.

The family of Juan Rubel Gutierrez created this Life Tributes page to make it easy to share your memories.