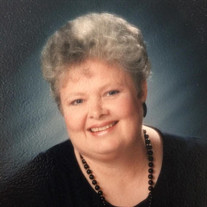 Juanita Mae Hansen Busby 1942 - 2016 Juanita Mae Hansen Busby returned to her Heavenly and earthly parents on January 6, 2016, passing peacefully at her home in Orem. Juanita was born in Salt Lake City, Utah on July 28, 1942 to Eva May Gardner and Kermit Victor Hansen. She grew up and attended schools in Ogden, Idaho Falls, ID, and Tustin, CA, graduating from Tustin High School. Juanita also attended BYU, completing two years of undergraduate courses, before she met David Scott Busby. They were married on September 7, 1962 in the Los Angeles LDS Temple. They made their first home in Tustin, and later moved to Arleta, CA. Juanita and David were married for 13 years and welcomed three daughters into their family. Soon after their divorce, Juanita went back to school, earning a certificate in medical billing. She worked at Valley Presbyterian Hospital in Van Nuys, CAfor three years before she moved her family to Orem, Utah in 1980. Juanita was the first employee of the Women, Infants, and Children (WIC) Program of Utah County. She was the one-woman staff for the program and set a solid foundation for its success and growth. She made many friends while at WIC and contributed to the program’s reputation of caring and efficiency during her years of leadership and service there. Juanita served others throughout her life. She held callings and worked with children, youth, and adults in The Church of Jesus Christ of Latter-day Saints. She was a friend to all she met and was known for her wit and forgiving nature. She was a support to those in need;a woman who had courage to face and overcome trials, and whoimparted kindnessto all. She relied on her Savior, Jesus Christ for her strength and comfort, and was an example of humility and perseverance. Her motto was “Family is Everything”, andshe always put her family before her own needs or wants. She was an excellent seamstress, making many of the clothes her daughters wore, including formal dresses. She enjoyed creating beautiful things and shared her talents. She created a family bond by insuring that her daughters (and later their families) spent time together working and playing through daily routine and traditional events and activities. Juanita was a wonderful mother, grandmother, great-grandmother, aunt, sister and friend. Her influence on her family is immeasurable – she was greatly loved and will be greatly missed. Our sadness is tempered knowing she was greeted with cheers of joy and admiration from family and friends when she left the confines of her earthly body behind. We know that we will see her again! Juanita was preceded in death by her parents, and her sister, Delores Blalock. She was also preceded in death by her step-father, Millard Ellis Talbot. She is survived by her daughters Laura Busby of Orem, Karan (Gary) Stone of Highland, and Colleen (Larry) Smith of Ft. Thomas, AZ, as well as eight grandchildren, and two great-grandsons. She is also survived by her brothers Gaylen (Nancy) Hansen of Plain City, UT and Larry (Susan) Hansen of Boise, ID. Funeral services will be 11:00 am, Friday, January 15, 2016 at the Timpview 3rd Ward LDS Chapel, 1075 West 1100 North, Orem, UT. A viewing will be held at the church Thursday from 6:00 to 8:00 pm, and Friday prior to services from 10:00 to 10:45 am. Interment at the Deweyville Utah Cemetery. The family is extremely grateful for the home health and hospice care and support their mom received from Darla, Robin, and Nancy. In lieu of flowers, Juanita’s family encourages donations to either the LDS Missionary Fund, or LDS Charities.

The family of Juanita Mae Hansen Busby created this Life Tributes page to make it easy to share your memories.