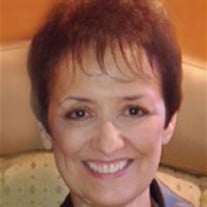 Our beloved wife, mother, grandmother, sister and friend, Juanita Pacheco Howard, passed away peacefully at her home surrounded by her loving family on December 17, 2015. Juanita, the daughter of Eddie and Frances Pacheco, was born in Romeo, Colorado on September 19, 1946. She grew up in a loving home with two brothers and four sisters. Their family bonds were strong, full of continuous laughter, large family parties, and weekly church service. Juanita graduated from Cyprus High School in 1964. She married William Avery Howard from Richmond, California in 1967. They were blessed with two sons and were married for 48 years. As a young couple, Avery served in the United States Army which took them to Germany for the early years of their marriage. Juanita loved these years and spoke of them often. Eventually, the family made their home in Taylorsville, Utah where their children attended school. After the boys were grown, Juanita and Avery moved to a new home in Kearns where they were residing at the time of her passing. Juanita was a very talented woman, an artist at the top of the list. She won multiple awards at state and local levels, and was awarded first prize in the national “Elvis in 1956 Online Art Contest.” This award gave Juanita and Avery the opportunity to travel to Graceland for Elvis Week. In Juanita’s words, “There will never be another Elvis or anyone who even comes close.” Juanita was a spiritual woman who put God first in every aspect of her life. Her radiant and loving personality attracted close friends from around the globe. Her smile and infectious laughter will be greatly missed. Juanita leaves behind her loving husband Avery; her two sons, Brandon (Kami) and London, and one granddaughter, Madison; one brother, Jerry; and three sisters, Alice, Loyda, and Bernice. She was preceded in death by her parents; one brother, Amos and two sisters, Julia, who died as an infant, and Maria. A celebration of her life will be held January 2, 2016, at 11:00 a.m., at The Mount Calvary Family Worship Center, 3050 South 3200 West, West Valley City, UT. The family extends deepest gratitude to the loving staff at Huntsman Institute. Heartfelt thanks are also expressed to dear friends and family who selflessly assisted and supported the family through this difficult time. Special appreciation is expressed to Bill and Bruce at Modu-Laser, LLC, who were so caring to Juanita over the past year.

Our beloved wife, mother, grandmother, sister and friend, Juanita Pacheco Howard, passed away peacefully at her home surrounded by her loving family on December 17, 2015. Juanita, the daughter of Eddie and Frances Pacheco, was born in Romeo,... View Obituary & Service Information

The family of Juanita Pacheco Howard created this Life Tributes page to make it easy to share your memories.