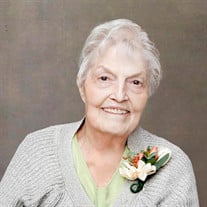 Judith Ann Pitts Madsen 1935 - 2018 Judith Ann Pitts Madsen was born December 1st, 1935, in Price, Utah, to Doyle and Florence Pitts. She passed away at age 82 on June 24th, 2018, in American Fork, because she just wore out. Judy was the first child and was followed by siblings Richard, Joan, Alan, Marilynn and Mark. Judy excelled in school and music. She read more books than one can count, and she played more hours on the piano than you can imagine. She attended Brigham Young University, delaying graduation for a while, but returning to finish a degree in Piano Performance at the University of Utah many years later. Judy taught hundreds of piano students for about 60 years and was highly dedicated to being an excellent teacher by continuing her own education even in her later years. It's hard to calculate the impact she has had on such a host of students over the years. Judy married Clair Evan Madsen in 1955, and had seven children. The first six were boys and finally a girl to top it off: Duff (Arlene), Jeff (Karen), Kevin (Jeneline), Robert (Michelle), Paul, Michael, and Jill (Kevin) Jacobs. Her grandchildren number 16; her great-grandchildren number 11.5. Judy was preceded in death by Clair and Paul. Judy spent 40 years of her life in Centerville in a home on Pages Lane. The last several years she has lived in Gilbert, Arizona, with Jill; she moved to Utah County in January of this year. She loved her family dearly and was concerned for each of her children and grandchildren until the end of her days. They truly mattered more to her than anything else. Judy was a faithful member of the LDS Church and a few weeks ago was really hoping to attend a granddaughter's wedding in the Payson temple which took place the day before she died. Her funeral will be held 11:00 am, Saturday, June 30th, 2018 at the Centerville 6th Ward Chapel, 890 South 400 East, Centerville, Utah with a viewing prior to the services from 9:30 to 10:45 am. Interment at the Centerville Cemetery.

The family of Judith Ann Pitts Madsen created this Life Tributes page to make it easy to share your memories.