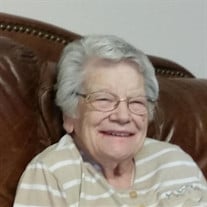 Julia Jean Hoops Munger On June 30, 1933, Julia Jean Hoops was born in the front bedroom at 422 Blue Lakes, in Twin Falls, Idaho. Her father was a successful road construction contractor and her mother had been a teacher. She had one older sister, Jenny. Jean attended Bickel Elementary. She was also active in Job’s Daughters, a youth organization sponsored by the Masonic Lodge, and the Campfire Girls. She attended Twin Falls High School where she met her husband Bill. While he attended Babson College in Wellesley, Massachusetts, and served in the Marines, she attended Northwestern University in Chicago, Illinois, then transferred and graduated from Webber International College in Babson Park, Florida, where she studied investment. After Bill returned from Korea, they were married in Twin Falls, September 2, 1955, in the Baptist church, and honeymooned at Redfish Lake in Stanley, Idaho, then moved to Boston for Bill to finish his last two years of college while Jean worked for an investment company. After Bill’s graduation, they returned to Twin Falls where they helped Jean’s father manage the Rogerson Hotel and raised their two sons, Dan and Casey, later welcoming their beloved grandchildren: Sean, Cassie, Tyrell, Caitlin, Michaela, Isaac, and Victor; and their adorable great-grandchildren: Tay, Adanna, Brynn, Kelton, Lera, and Emily. Jean and Bill were baptized into the Church of Jesus Christ of Latter-day Saints together at Redfish Lake, September 6, 1994, on their 39th wedding anniversary and exactly a year later, were sealed in the Manti Temple. In 2010, the year of Bill’s death, they moved to St. Helens, Oregon, so her son Casey could care for them. Six years later, Jean came to Utah with her son and his family. Her last two years in Layton, Utah, were brightened by many visits, letters, cards, bouquets, pictures, outings, sugar cookies and other gifts from the children, grandchildren, nieces and other family and friends who loved her. She died February 26, 2019, from kidney failure.

Julia Jean Hoops Munger On June 30, 1933, Julia Jean Hoops was born in the front bedroom at 422 Blue Lakes, in Twin Falls, Idaho. Her father was a successful road construction contractor and her mother had been a teacher. She had one older... View Obituary & Service Information

The family of Julia Jean Hoops Munger created this Life Tributes page to make it easy to share your memories.