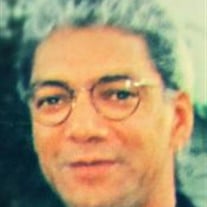 Gonzalez, Julio Enrique of Salt Lake City - born September 25, 1951 in New York City, died from cancer at his home on November 9, 2012. Beloved father, grandfather, son, brother, uncle, cousin, colleague and friend, he is survived by daughters Amanda and Ariana, grandchildren Dominic and Jayzene, father Alejandro ‘Don Guito’ Gonzalez of Puerto Rico, former wife Sharon and his many loving family and friends. Julio served in the Army as a paratrooper in Vietnam. He loved his work as a Massage Therapist and coaching girls’ soccer. He enjoyed golf, softball, skiing and dancing to salsa. His greatest joy was his children and grandchildren. Their continuing education made him the most proud. Julio faced his cancer “with a smile.” He will be greatly missed by all who knew him. The family wishes to extend our deepest gratitude to Dr. Neeraj Agarwal, Deborah Thorpe PhD APRN, the staff of the Huntsman Cancer Hospital and Clinics, and Quality Solace Services Hospice for their compassionate care. A remembrance service will be held on December 17, 2012 from 5:30-7:30pm at the Huntsman Cancer Institute Auditorium. In lieu of flowers, contributions to Julio’s grandchildren’s education fund will be gratefully accepted c/o Sharon M. Weinstein MD, Huntsman Cancer Institute, Room 2151, 2000 Circle of Hope, Salt Lake City, Utah, 84112.

The family of Julio Enrique Gonzalez created this Life Tributes page to make it easy to share your memories.