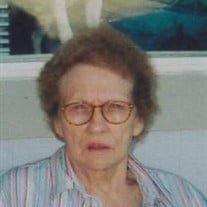 Our dear Mother, Grandmother, Great Grandmother, Sister, Aunt & Friend crossed over and is now holding hands with her daughter, Junette. June age 84, born June 13, 1930, passed away February 19, 2015 after a short battle with cancer. She was born in Salt Lake City, Utah, to George Casto Evans and Oral Susan Scoggins(Evans). June was one of 7 children; Mary, Jay (Joseph), George, Orville (Nelda), Donna Quast, Laura Wilson. June had one daughter Junette Marie Phibbs. June grew up on meager means and learned to save every penny. Later in life, her and her sisters enjoyed going to breakfast and taking small road trips. These were happy times for her. June worked several jobs in her lifetime from a caretaker to the Salvation Army. She loved to care for her family, birdwatching, crocheting, crafts, loved to cook (especially her fruit cake). June had her grandchildren, Scott & Kelly, over on the weekends to spend the night and enjoyed the good quality time with them. She leaves behind her beloved grandchildren; Scott (Julie) Roseberry & Kelly (Kevin) Blatnick . Great-grandchildren – Chase & Jessica Roseberry, Tyler (Whitney) Luker (Blatnick), Ricky, Kevin Jr Blatnick. Great Great-Grandchildren – Dallon & Zarron Luker, Kaydence & Maddison Blatnick. Three sisters and very close friend, Valerie & Terry Phillips. Valerie and June became very close a few years ago when they needed each other the most. Preceded in death by her daughter, Junette, her Mother and Father, 3 brothers, and a great-granddaughter, Ruby. We would like to give a special thanks to all of the staff at Hunter Hollow Care Facility for the care of our Grandmother. A Memorial Service in her honor will be held at 6:00pm, Monday, February 23, 2015 at the LDS Church located at 4731 South 4300 West, West Valley City, Utah. In addition, there will be a memorial held 2:30 pm, Tuesday, February 24, 2015 at the Hunter Hollow/Rocky Mtn Care Facility, 4090 W Pioneer Parkway, West Valley City, Utah. In lieu of flowers, the family would greatly appreciate donations to help with funeral expenses.

The family of June L. Coleman created this Life Tributes page to make it easy to share your memories.