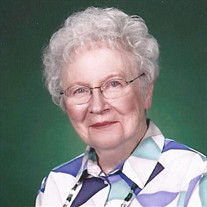 In the quiet morning hours of December 8, 2015, our beloved June Mazurie peacefully returned to her waiting husband, the late James V. Mazurie. 91 at the time of her passing, June lived a graceful long life. She was born June 23, 1924 in Pittsburgh, PA to Charles and Pearl Fairman. She was an only child. Upon graduating for Business College, June began a career as a secretary. Upon the urging of a friend, she went on a blind date with James. After four years of courtship, they married in September 1950, she was 25. For their honeymoon, June and James went west to Utah, where they eventually stayed.One year later, son Charles (Karen) was born and in 1954 daughter Jo Ann (Dan Street) was born. With her husband, June lived in Provo but went to live inLander, WY for a brief time while her husband took a position with US Steel. Not long though, they returned to Provo until the late ‘80’s, when they moved to Salt Lake City to be closer to their Shriner friends and community. They traveled throughout the state and the western U.S. through their Shriner. June volunteered at the Cottonwood Presbyterian Church for many years and made lifelong friends. She belonged to many organizations and charities. She loved to read, watch the Utah Jazz, wii bowling, bingo and exercise group. When she was younger, she enjoyed camping with her family in their motor home and driving around in their pickup truck. June is survived by her children, 5 grandchildren and 4 great-grandchildren and preceded in death by her parents, husband, son-in-law and granddaughter. The family would like to give a special thank you to Michelle Monsteller for her many years of loving care as well as Valeo Hospice, Rose Haslam and Julie Witten for their compassionate care, and her many wonderful friends. Viewing hours are 2:00 to 4:00 pm, Sunday, December 13, 2015 at the Cottonwood Presbyterian Church, 1580 E. Vine St., Salt Lake City. Graveside services 10:00 a.m., Monday, December 14, 2015 at Murray City Cemetery followed by a Memorial Service at the Cottonwood Presbyterian Church. In lieu of flowers, please make a donation to either the Shriners Hospital for Children or the Cottonwood Presbyterian Church.

In the quiet morning hours of December 8, 2015, our beloved June Mazurie peacefully returned to her waiting husband, the late James V. Mazurie. 91 at the time of her passing, June lived a graceful long life. She was born June 23, 1924 in... View Obituary & Service Information

The family of June Adele Mazurie created this Life Tributes page to make it easy to share your memories.